According to the American Hardwood Export Council and the National Hardwood Lumber Association (NHLA), Chinese tariff exemptions that were set to expire on September 17 have been extended until April 16, 2022.

The tariffs apply to hardwood logs and lumber products exported to China from the U.S.

China implemented these tariffs in May 2019 as a retaliatory measure to the tariffs placed on it by the Trump Administration. In February 2020, China first announced exclusions.

Of the 65 initial exclusions, seven were wood products, including hardwood logs; jointed and non-jointed-end lumber; “other” oak logs; and cherry, ash, and other lumber with thickness over six millimeters.

Declining availability of US hardwood in Europe

US hardwood supply to Europe in the last six to nine months was described by importers as turbulent. According to Judd Johnson, editor of the Hardwood Market Report, quoted in a recent article in the UK Timber Trades Journal, the American hardwood sector entered the pandemic in a ‘diminished state’.

It was hit first by tariffs in the US-China trade war and subsequently a general weakening of Chinese demand when trade relations improved. Mill capacity was then significantly further reduced by Covid absenteeism and what some saw as the government ‘paycheque protection programme’ a disincentive for employees to return to work.

The widely broadcast result has been sharp declines in availability and sharp increases in price. At one point this summer, a UK importer described 4 quarter American white oak as ‘vanishingly scarce’ and forward order availability ‘non-existent’. The price had doubled over the year, as had that for tulipwood, while walnut was up 65- 70%, maple 30% and ash 40-50%. Availability was not helped by some hardwood mills switching to softwood to capitalise on booming demand from US construction.

The situation does now seem to be easing, with more ‘offers on the table and timber in the pipeline’. “It may partly be a case of timber drying quicker in the summer and so more coming available, but mills do seem to be keeping pace better with demand, and we hear some of those which switched to softwood have switched back again as that business has softened,” said an importer. Despite this, little change is expected in US prices until sometime into next year.

Given the price and supply situation in US hardwoods, there has been some switching in Europe to European species, notably oak.

Due to this and rising demand elsewhere, plus it is reported the decision of the Croatian authorities to put higher oak grades from state forests to auction rather than sell be tender, prices are up 15-25% this year, with further 3-5% rises anticipated in coming quarters.

European oak availability is also reported to have declined recently and concerns were expressed about longer term supply given the prospect of a Russian log export ban in 2022.

“China buys such huge volumes of Russian logs of all varieties,” said an importer. “Unless it can cut a bilateral deal with Russia, or Chinese companies can build sawmills there, it’s going to be looking to other sources, and that includes Europe.”

European beech is also reported to be up in price 10% in the year to date and one importer said they were experiencing longer lead times. One factor seems to be customers substituting beech for tulipwood due to the latter’s high price.

The post Declining availability of US hardwood in Europe appeared first on Timber Industry News.

Drax Group has started construction on the second of three satellite wood pellet plants in Arkansas.

Work is underway at the site in Russellville, Pope County, north-western Arkansas, with commercial operations expected to begin at the plant in 2022. The move is part of a $40 million (€34 million) investment by Drax in the state, creating around 30 new direct jobs and many more indirect jobs.

Earlier this year, construction began at Drax’s first satellite plant in Leola, Grant County, and commercial operations are expected to begin late this year. Progress is being made on selecting the third and final site.

“The investments we’re making will bring jobs and opportunities to rural communities in Arkansas alongside supporting international efforts to tackle the climate emergency.

“These plants support Drax’s plans to develop bioenergy with carbon capture and storage – a vital negative emissions technology that will be needed around the world to meet net-zero targets.”

Södra to expand its CLT business to Denmark

Södra has announced that its complete offering of CLT panels for frame assembly with complementary products and services will now be available in the Danish market starting in September.

This is the first step of Södra’s plan to expand their CLT business into Europe.

The business will be part of the Södra Building Systems business segment, with Kenny Holm serving as the new Marketing Manager for Denmark. All aspects of production will be done at Södra’s combined facilities in Varberg Municipality in Sweden.

Urban Blomster, Head of Market and Business Development for Södra Building Systems said of the expansion, “We are seeing a large interest in Södra’s CLT outside Sweden, and Denmark is the first step in our international establishment. They have come a long way in sustainable construction and are phasing out traditional materials, mainly in favor of CLT. Moreover, Södra’s geographic location in south-west Sweden is ideal for this market. With Kenny as Marketing Manager, we will gain valuable momentum in establishing a strong market position and launching our offering.”

The post Södra to expand its CLT business to Denmark appeared first on Timber Industry News. 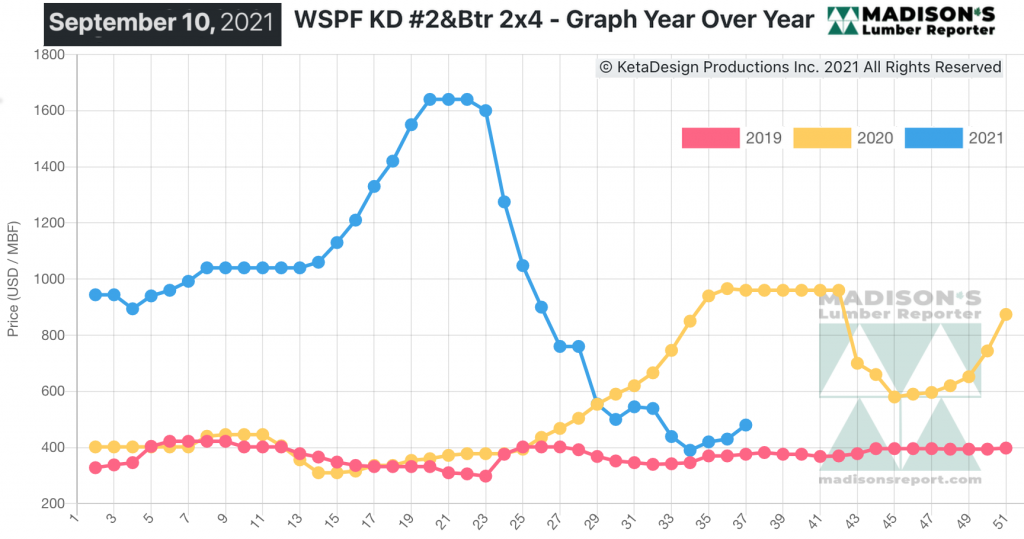 After a big lull in sales and steeply falling lumber prices — albeit from unsustainable highs — for the week ending September 10, 2021, sales volumes improved further and with that lumber prices again increased.

As often repeated by Madison’s: Labour Day long weekend provides good indication of whether lumber sales will slow to the end of the year or if there remains life in the market yet. This year, as with last, it is clear by now that strong lumber demand is with us for some months yet, before the usual seasonal slow-down and end to construction activity in winter.

Inventories up and down the chain remained light and created a note of urgency among buyers, who found increasingly limited availability from suppliers as they explored their options.

Sales volumes in the US Western S-P-F market was vigorous as scores of undersupplied buyers came back from their Labour Day reveries, rolled up their sleeves, and got down to business. Any prompt wood that mills had left was gone by midweek .
Canadian Western S-P-F purveyors reported strong demand in the holiday-shortened week as folks settled back into a somewhat normal post-Labour Day pace of work and school. Demand was especially strong in US construction markets.

Strong inquiry and follow-through from US markets and the Toronto region created considerable momentum in Canadian Eastern S-P-F sales. Sawmills upped their asking prices and got little to no pushback from customers, most of whom saw the tide turning and jumped in to secure more than just near-term needs. Retailers were among the most active purchasers as they worked to secure larger volumes at current prices.