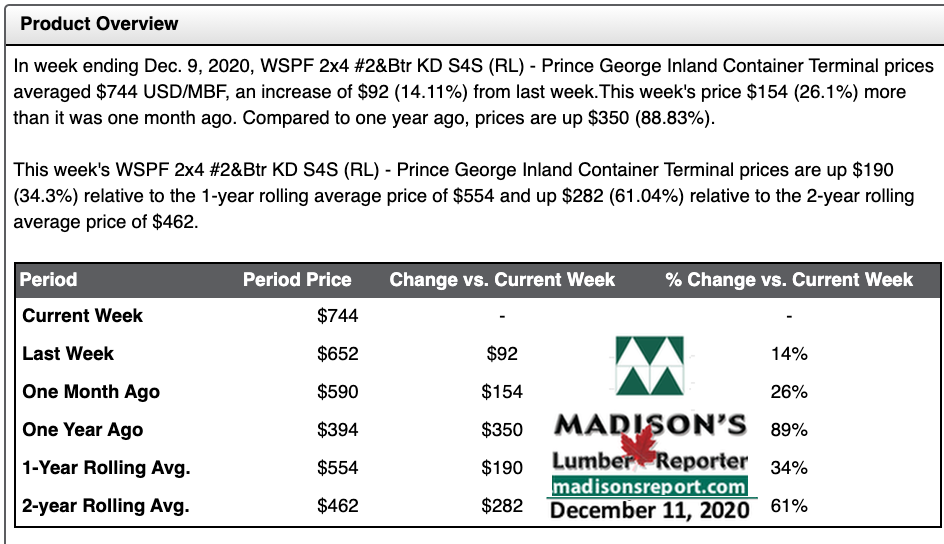 This week marks the normal seasonal end to softwood lumber manufacturing across most of North America annually.

Sawmills in Eastern Canada, specifically Quebec, are already on their yearly seasonal break, and those in the West are not far behind with curtailments and closures, according to Madison’s Lumber Reporter. Usually at this time of year construction activity is down to almost nothing, and lumber producers are spending their time doing year-end accounts and taking inventory.
In order to be in a good position for tax reporting, sawmills want to empty their yards of manufactured wood products before year-end. Also they want to have their log yards stacked as full as possible. Because demand has been so consistently strong, which is very unusual for December, lumber suppliers have been quoting wood sales into January 2021. This with the accompanying increase in prices, of course. Customers, while reluctant, can do nothing but accept the higher price lists because none have been stocking inventory and there continues to be rush of real building projects to serve.
Industry expectations, therefore, are that current price increases will remain through the Holidays and into the beginning of January.

Western S-P-F purveyors in the US reported another gangbusters week as scores of buyers jumped into the fray, capitulating to the strong, upward trajectory of demand. With Canadian producers selling out at home every day, primary and secondary suppliers in the US were under siege from desperate customers whose hand-to-mouth strategies have ensured perpetually-light inventories. Sawmills pushed their prices up on every conceivable commodity, thus most order files stretched into the first week of January.

Canadian Western S-P-F producers continued selling out like crazy every day, leaving not a speck of fibre for the US market. Sawmill order files were to the first week of January and fully expected to move further this week. Producers in BC reported log supply was becoming a real problem in that province’s Interior. Any heretofore freezing weather events were short-lived and on balance the climate has been so mild thus far that harvesting and hauling crews simply can’t access and convey enough raw logs.

“The frenzy of panic-buying of Eastern S-P-F lumber and studs was alive and well last week as prices skyrocketed ever further. Buyers continued to deal only in small volumes, partly due to their reticence to cover anything more than immediate needs and partly due to a persistent lack of overall supply. For their part, sawmills couldn’t keep production even close to apace with demand, as winter weather affected operations and surging coronavirus cases caused staff shortages or even temporary shutdowns. Sawmill order files were almost ubiquitously into the New Year 2021 as buyers desperately scrambled to plug holes in their empty inventories.” — Madison’s Lumber Reporter