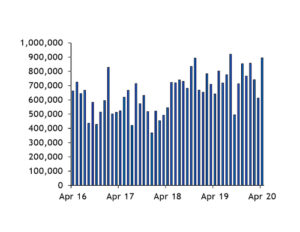 Biomass averaged 7.98% of UK grid demand in April, compared to 6.82% in March and 5.27% in April last year, according to data from Drax and Imperial College London.

UK generator Drax saw just two days off line across its three 645MW biomass base-load units at its Selby plant in North Yorkshire in April, and a further outage day at its 645MW peak-load biomass-fired unit 4. Comparatively, there were 12 outage days at the three base-load units in April 2019, and an additional 10 days at its unit 4.

Czech-Slovak utility EPH’s 396MW Lynemouth plant in northeast England continued to ramp up, with capacity availability averaging 87.24% last month across its three units. Availability at the plant averaged 85.74% in March this year and 79.42% in April 2019.

Output from North America also hit a record April high this year, driven by strong growth in US shipments, while Canadian exports were marginally weaker on the year.

Immingham, on the east coast of England — where Drax has unloading facilities and 120,000t of storage for its Selby power plant — was the UK’s most active wood pellet handling port in April. Throughput reached 403,000t, compared with 282,000 in April 2019. The majority of imports handled at the port came from the US.

And throughput at the UK’s second-most active port, Tyne, rose by 53.6% on the year. The port handled 192,000t of wood pellets in April. Throughput at Liverpool also rose by 75.4% on the year. Drax and EPH have storage and unloading facilities at the port of Tyne for their respective power plants in Selby and Lynemouth.