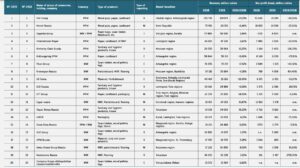 Based on the results of 2018, the combined revenue of the Top 100 Russian timber companies skyrocketed to the highest level in Russia’s contemporary history. The main reasons were high prices for timber products in global markets that sustained over most of 2018, and weakening of the ruble compared to the US dollar. In the end of 2018, the global economic cycle changed and the prices for commodities, including timber industry products, dropped.

During 2019, global markets, including the timber industry market, were under pressure created by the tensions between the two largest economies – the USA and China. The trade argument directly involved timber industry products, among other goods, which created uncertainty and increased risks for all industry players, including those from third countries. Nevertheless, agreements between China and the USA and dispelling Brexit-related concerns became positive signs in the global economy in 2019.

Decelerated growth rates of the global economy and geopolitical tensions reduced the demand for timber industry products. Prices for most timber products remained at low bases.

Companies were able to maintain their operating margin due to extremely low prices for wood raw materials. In Europe, windfall timber and timber generated because of the bark beetle attack led to slumping raw materials prices. In Russia, the anomalous warm weather basically torpedoed the plans of winter timber harvesting, but this did not make the market prices grow.

Many of the global timber enterprises reported a reduction in revenue or lowered their return rate by EBITDA based on the results of 2019. Mondi Group’s revenue reduced by 3%, down to €7.268 billion. International Paper’s revenue reduced by 3.99%, down to $23.376 billion. The global timber industry sector followed the overall global trend in March 2020: the market capitalization of the largest timber enterprises dropped by 25-50%.

Russian timber enterprises also demonstrated lower financial performance after the super profits received in 2018. For instance, Ilim Group, the leader of the Russian timber industry, lost up to 30% of EBITDA due to dropping wood pulp prices, while its revenue reduced by 20% down to 124 billion rubles. Nevertheless, Ilim Group reported that in 2019, it has implemented its $715 million (46.3 billion rubles) investment program, which is almost two times greater than 2018 investments. The company has completed a series of significant investment projects: construction of a new cardboard production site in Bratsk and upgrading of wood pulp production in Ust-Ilimsk project whose implementation will be completed in full (it involves increasing the output of unbleached packaging materials). In 2019, the output of pulp and paper products at all Ilim Group’s sites dropped to 3.3 million tons (compared to 3.4 million tons in 2018).

Despite all the negative trends in the global market throughout the year, most of the companies (59 out of 100) were still able to demonstrate a positive: annual growth in revenues based on the results of 2019. The share of Russia’s 100 largest timber enterprises in the total volume of timber sector revenues is growing every year – upsizing and consolidation of timber enterprises is continuing. The role of small and medium-sized forest businesses is declining.

Investments in the Russian timber industry over the past three years have remained at the level of 145-150 billion rubles. Investments in timber harvesting were high in 2010-2012 – in the early days of priority investment projects in the forest sector. Over the subsequent years, investors were actively investing their money in products with higher added value. In Q1 2020, the investment value was no lower than in the same periods of the previous years. Foreign investment has been declining for three years in a row. In 2019, its value was 3.7 billion rubles. This is less than 2.5% of the total volume.

It can be acknowledged the that year 2019 was challenging for the timber industry, particularly compared to the super successful previous year of 2018. Prices for timber industry products dropped by 20-40% over the year.

In H1 2020, the Russian timber industry, just like the global economy and industry, faced the extraordinary risks caused by the spreading coronavirus. Even though the timber industry is not considered to be the most afflicted sector either in Russia or globally, timber enterprises faced the reduced demand for their products in global markets. The situation was particularly challenging in April-May 2020, when many companies were compelled to suspend production.

The currently available data for 8 months of 2020 shows that, based on the results of 2020, timber enterprises will achieve last year’s performance in the best-case scenario, but most probably both the production output and the revenue across key timber industry segments will reduce.