Timber prices in Germany are increasing; supply not able to keep pace with demand 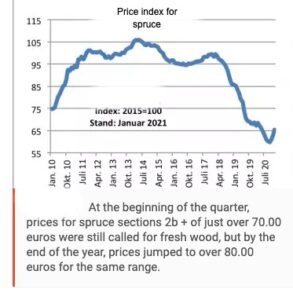 The rise in wood prices in Germany continues – with supply not keeping pace with growth in demand in some market segments.

In addition, despite the recovery, the price level, especially for spruce wood – but also for pulpwood – is not too far from the historic price lows of the previous year. The price signals, especially for softwood and pulpwood, are extremely dynamic: “The market is developing positively, prices are rising,” said Martin Neumeyer, CEO of the Bavarian State Forests, at the end of February.

In some regions, if the development remains the same, fresh wood could soon become scarce, Neumeyer said. “After the severe crisis on the timber market, forest owners can look to the future with optimism again due to too much damaged wood,” emphasizes the head of the state forestry.

Neumeyer expects prices to continue to rise over the course of the year. And this is also confirmed by the current figures from the economy – even if there is still plenty of room for improvement in prices for many types of wood – as the current price data from the Federal Statistical Office show (see graphic).

Demand for wood: construction boom and export boom at the same time

At the beginning of the quarter, prices for spruce sections 2b + of just over 70.00 euros were still called for fresh wood, but by the end of the year, prices jumped to over 80.00 euros for the same range.

This is also confirmed by Martin Neumeyer, who says: “After the sharp rise in prices for sawn timber

and wood products last year, the prices for the raw material are now also increasing.”

And exports are also booming: last year, for example, exports of softwood sawn timber from Germany to the USA increased by 42 percent to 1.63 million cubic meters compared to the previous year. This makes Germany the second most important supplier of softwood sawn timber in the USA after Canada (30.8 million cubic meters). At the same time, softwood prices in the USA reached record levels again at the end of 2020.

The German softwood sawmills therefore produced at a very high capacity. Changes to the bark beetle control strategy in the main damaged areas also led to a lower incidence of calamity wood, reports the StMELF. This has contributed to the fact that despite the expected accumulation of around 66 million solid cubic meters of damaged softwood in Germany in 2020, the demand for beetle wood has exceeded the quantities provided by forest owners since the beginning of the fourth quarter.

While prices for spruce sections 2b + of just over 70.00 euros were paid for fresh wood at the beginning of the quarter, prices jumped to over 80.00 euros for the same range towards the end of the year.

Almost all of the fresh spruce logs were paid over 80.00 euros. The discounts for poor beetle qualities were in most cases 25.00 – 35.00 euros per cubic meter. Now the felling of spruce wood is to be limited – which would further reduce the supply.

The market for pine logs has also picked up in the wake of the strong demand for spruce – albeit with unsatisfactory prices of around 60.00 euros.

There is no export demand for hardwood

The price determination by the Federal Statistical Office shows a moderate decline in prices for oak wood and a somewhat stronger price discount for beech for January 2021 – after prices had risen significantly at the end of 2020.

In the case of hardwood processing companies in Germany, however, the mood has recently deteriorated somewhat, says the Bavarian Ministry of Agriculture in its timber market report. After declines in the German production of hardwood lumber in previous years, this trend has apparently intensified by the end of 2020. The reason: exports of beech and oak sawn timber have decreased significantly compared to the previous year.

The export statistics say: In 2020, exports of hardwood lumber fell by 11 percent year-on-year to a total of 650,000 m³. Between 1 percent and 34 percent less than in the previous year were sent to almost all of the larger customers.

However, the global hardwood price index (HFPI) rose slightly in the fourth quarter of 2020 compared to the third quarter. This is the second price hike after hitting the 15-year low in the second quarter.

In Germany, however, the demand for oak in particular has recently been high. In some regions, however, beech felling fell short of the planned and demanded quantities, as a lot of processing capacity was tied up in the felling of beetle wood, reports the StMELF.

The price determination by the Federal Statistical Office shows a moderate decline in prices for oak wood and a somewhat stronger price discount for beech for January 2021 – after prices had risen significantly at the end of 2020. For both types of hardwood, the prices are currently lower than in January 2020.

The price determination by the Federal Statistical Office for Industrial Timber shows a sharp rise in prices for January 2021, after prices had rather stagnated until the end of 2020 – and are still at a very low level overall.

The Federal Association of Wood Packaging, Pallets, Export Packaging (HPE) reported these days that the ability of pallet producers and other wood packaging manufacturers to produce is acutely endangered by the increasing scarcity of raw materials on the German wood market. Noticeable impairments are expected. According to the association, around 110 million wooden transport pallets are produced in Germany every year.

Exports to China and the USA have drastically increased the availability of wood in the past few months. Individual ranges of sawn timber and wood-based materials, such as plywood and certain chipboard, are currently hardly available. Demand and prices for sawn timber had increased in Germany in the past few months. One reason for this is the ongoing good construction industry.

A shortage of pallets and wooden packaging threatened noticeable impairments for the entire movement of goods – within Germany and for export. “Then we will no longer just talk about the fact that toilet paper is running out. The food sector, the chemical industry or mechanical and plant engineering will also be significantly affected, ”said HPE Managing Director Marcus Kirschner. The price determination of the Federal Statistical Office for Industrial Timber shows a sharp rise in prices for January 2021, after the Kusre had rather stagnated until the end of 2020.

The post Timber prices in Germany are increasing; supply not able to keep pace with demand appeared first on Timber Industry News.