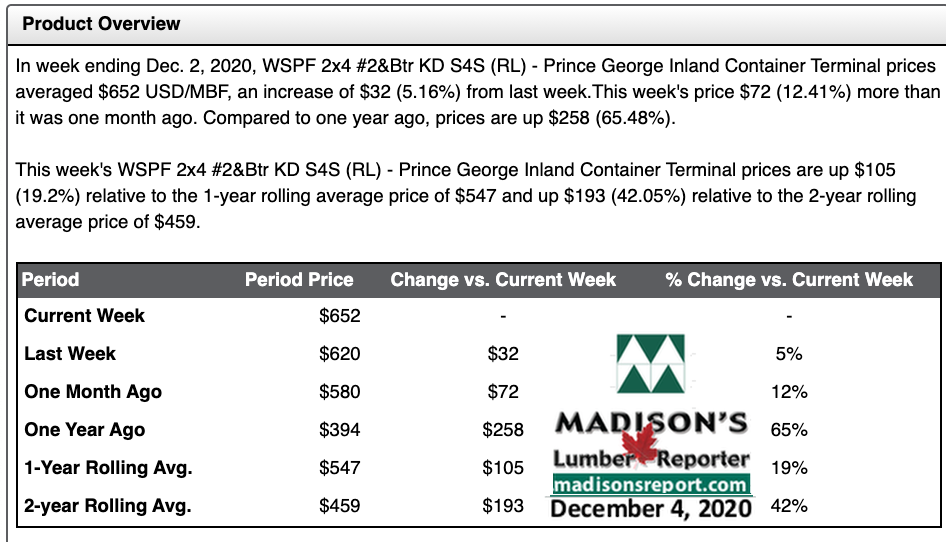 At a time of year when housing construction across North America is usually slowing down to very limited activity, thus softwood lumber prices are usually quite soft, in the past couple of weeks there has been a resurgence of strong demand for solid wood products. Prices of dimension lumber commodities have responded upward accordingly.

Underpinning the hot lumber sales and rising prices is continued extremely rosy US home sales and house price data. Lumber manufacturers in Canada and the US are experiencing such strong demand that sawmill order files are pushing out into the start of 2021.

Forest industry veterans and home builders with 40 years experience alike have never seen this situation toward year-end. All agree, however, that home sales, house prices, and home building will not reverse direction any time soon.
Madison’s expects a hot US housing market to last at least to the end of 2021.

“Prices of virtually every commodity continued to climb last week; especially in studs where levels were bonkers.” — Madison’s Lumber Reporter

Western S-P-F purveyors in the United States were chuffed with a strong week to start December. Buyers were frequently in the mix to shore up their empty inventories thus sawmills pushed their order files into late-December or early-January 2021. Prices continued to climb and buyers had no choice but to participate, as downstream consumption was uncharacteristically robust considering the time of year. Players use American Thanksgiving as an important litmus test for the market. The result this year appeared to be more vigourous demand than many had expected.

Canadian producers of Western S-P-F lumber reported another good week as prices on every dimension item climbed yet again. Relentless demand persisted as Canuck sawmills sold out so quickly each morning that the US cash market didn’t see a stick of bread and butter lumber items on offer. Resultant order files on all items were into the first week of January 2021.

“Eastern stocking wholesalers along the US Eastern Seaboard described the eruption of a buying frenzy following the American Thanksgiving holiday weekend. One veteran vendor likened the surge to the follow-the-leader behaviour of lemmings, as a few customers jumped off the cliff and incited a rash of panic-buying. The perpetually-depleted state of field inventories helped push prices up, of course.” — Madison’s Lumber Reporter