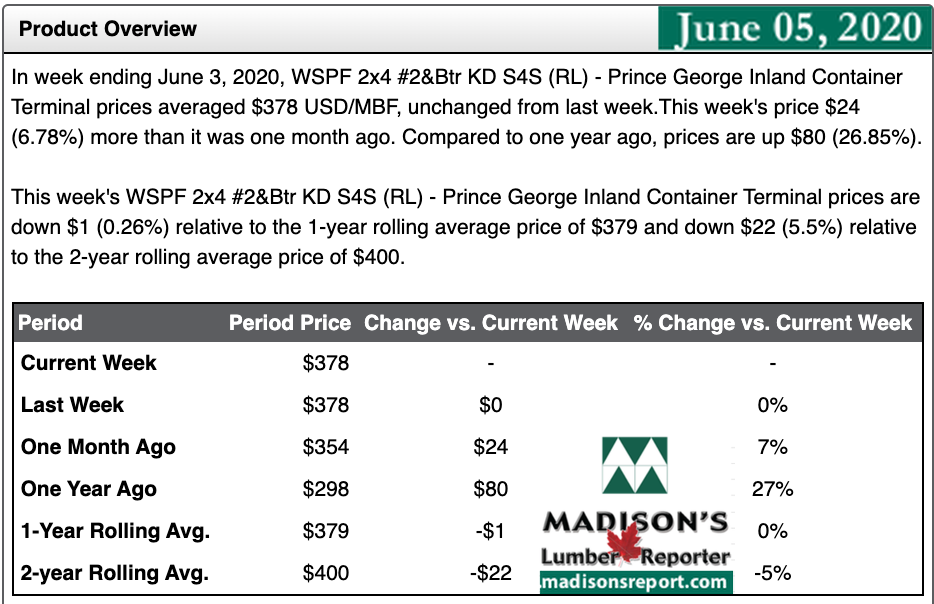 Sales of Western-Spruce-Pine-Fir construction framing dimension softwood lumber in the United States took a step back last week as civil unrest around the country led to most buyers taking a circumspect approach, by sitting on whatever inventory they had. Construction in the Western portion of the US continued to ramp up, albeit more slowly, as overall economic activity was tamped down by protests. In Canada, meanwhile, demand from the most important markets in the US slowed to a crawl. Canadian producers of WSPF lumber noted a considerable lack of inquiry for standard grade commodities.
In the East, robust sales from late the previous week carried over to last week, before buyers became more thoughtful and took their collective foot off the gas. There was still plenty of volume being moved from midweek-on, but players described a pullback in overall demand.
As indicated by Madison’s last week, in the immediate term it is panel — specifically plywood — prices which will provide indication of upcoming demand for softwood lumber. Benchmark panel item Oriented Strand Board prices remained flat last week but Canadian Softwood Plywood 3/8” Toronto rose another +$8, or +2%, to C$496 msf from C$488 the previous week. This price was C$414 msf one month ago, and C$440 in the same time last year.
For the week ending June 5, 2020, prices of most standard construction framing dimension softwood lumber items remained flat, with benchmark item WSPF 2×4 #2&Btr KD still at US378 mfbm, as the week before. The price for this benchmark lumber commodity was up +$24, or +7% from one month ago. Compared to the same week in 2019 when it was US$298, this price is up +$80, or +27%.

“There was a constant flurry of sales and inquiry in the East, particularly for panels. Demand in the West paused due to uncertainty.” — Madison’s Lumber Reporter

Taking a closer look at panel, buyers turned to the distribution system last week in Eastern Canada and cleared out substantial amounts of inventory. Budding construction activity drove plywood sales, while demand for OSB was quiet by comparison. Plywood order files were into the week of July 13th, while production at OSB mills was booked to June 15th. Lest anyone think the bonkers plywood market was a boom before the bust, players noted that production was still limited and this push could be more sustainable than it seems.
Sales of WSPF sheet goods were much quieter than their Eastern counterparts last week. One large producer had plywood order files into mid-July. However no secondary supplers were buying that far out, preferring to wait and see how the market goes in the next couple of weeks. Order files at Western OSB mills were into the week of June 22nd, even as demand there was quiet. No transportation issues were reported by shippers.

“Eastern stocking wholesalers on the shores of New Jersey had a crazy week. All inventory was oversold as folks panic-bought to assuage their fears of not being able to find anything in 30 days.” — Madison’s Lumber Reporter

The above table is a comparison of recent highs, in June 2018, and current June 2020 benchmark dimension softwood lumber 2×4 prices compared to historical highs of 2004/05 and compared to recent lows of Sept 2015.