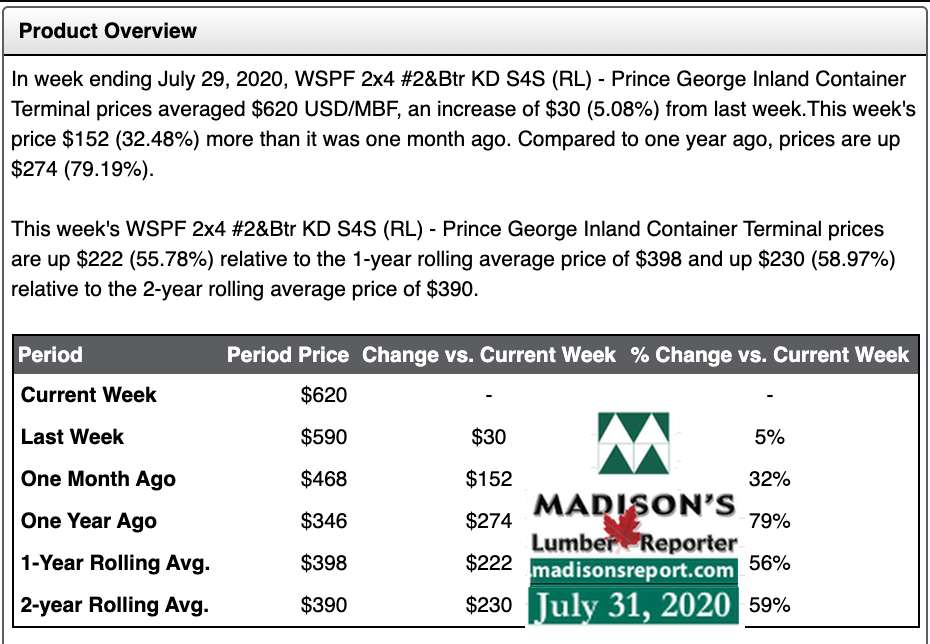 At a time when end-users have usually received delivery for expected building needs until after September, demand for North American construction framing dimension Softwood Lumber remained strong last week. Already with order files into the end of September, sawmills quoted higher on prices for product that was nowhere near a production date.
Customer inventories were so lean and supply so weak that some Lumber commodity items were impossible to find. When volumes were located buyers agreed to any price whatsoever, as long as they were assured delivery. Even if that wouldn’t be for six weeks.

In seemingly never-ending bad news, the 2020 storm season has arrived and is currently battering the US east coast. If that damage is serious, sales of Plywood will spike for immediate needs then again later for rebuilding. Supply of Panel building materials is as low as that of Dimension Lumber, thus it is possible for Plywood prices to drive up yet further.
Normally the rush of demand following big storms lasts approximately six weeks. However this is clearly not a normal time, and the US storm season is just starting.
Check back with Madison’s frequently to find out what movements Panel prices, Plywood and Oriented Strand Board (OSB), are doing.

Following a Board-generated spate of confusion early the previous week, the US Western S-P-F Softwood Lumber market returned to a frenzy of demand last week to close out July. Everyone from end users to secondary suppliers hectically pursued any scrap of wood they got wind of, often ending up empty-handed. Inventories at all levels were virtually depleted and sawmills continued to fall behind in their harried efforts to keep pace with demand. Prices were up significantly on all commodity items and sawmill order files stretched into late August or early September.
Canadian Western S-P-F purveyors described a state of near-pandemonium in the market last week as the price of R/L #2&Btr 2×4 eclipsed the vaunted US$600 mfbm mark, rising $30 to US$620 mfbm (net FOB sawmill). All other dimension offerings climbed between $10 and $44, aside from #4/Economy 2×4 and 2×6 which remained flat. Customers have become numb to sticker shock in recent months and ultimately capitulated, so desperate was their need for solid wood commodities. Canadian sawmills continued to sell out every morning by 7:30am, with little to nothing available for peddling on the cash market. Inventories at all levels were empty.

“Customers have become numb to sticker shock in recent months and ultimately capitulated, so desperate was their need for solid wood commodities.” — Madison’s Lumber Reporter

The crazy market in the Northeastern US persisted last week as frantic buyers committed to wood they wouldn’t see until mid-September at prices never even conceived of before. With costs so high and shipping so far behind, Eastern stocking wholesalers at the docks in New Jersey noted that prices or delivery dates were no longer the main sticking points, rather it was credit lines. To paraphrase one veteran vendor, if you can’t finish one job due to supply constraints how can you expect to get the credit to start another one?

The above table is a comparison of recent highs, in June 2018, and current July 2020 benchmark dimension Softwood Lumber 2×4 prices compared to historical highs of 2004/05 and compared to recent lows of Sept 2015: