Outlook of the Finnish softwood lumber industry in 2020-21 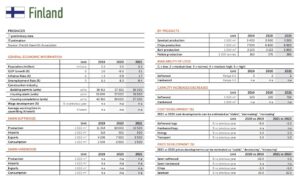 Cooling of the Finnish economy could already be seen in autumn 2019. The Finnish economy has suffered seriously from the corona pandemic during the first half of 2020 and the contracting global economy shadows the outlook of the export-driven economy.

The output of the forest industry sector decreased substantially during the first quarter due to strikes which limited the output.

Thus, the output of the industry increased substantially during the second quarter – compared to the weak first one. The trend in the paper consumption has been negative for years.

The negative development has accelerated in 2020 due to the corona virus and resulted in an-nouncements of paper production curtailments and permanent closures of mills. The packaging board demand has remained more stable, but prices have declined clearly. The demand of pulp has enabled the mills to run at capacity until late summer 2020 – however the prices have been on the soft side.

It is estimated that the Finnish GDP will decline in 2020 by approximately 6% compared to last year.

The roundwood market has been very slow and lags clearly behind the purchasing volumes of recent years. The market was seriously impacted by the declining demand which was caused by the strike-driven curtailments in January and February and further by the COVID-19 shrinking the order books of papermills.

COVID-19 related lock-outs have had practically no direct impact on the roundwood supply or mill outputs. Despite the declining demand, the Finnish roundwood prices have remained high in Finland.

It is estimated that the output of Finnish mills will hardly reach 10 million m3 in 2020. The weakness of the pulp- and paper industry puts pressure on pulpwood volumes and prices. The log prices declined in 2019 but have strengthened recently.

The pulp chip market improved substantially in 2018 and 2019 and unusual price increases were seen. The market has remained buoyant, so far. The markets for dust and bark have improved thanks to the increasing demand of wood-based fuels as Finland is finally moving away from fossil-based heat-ing fuels.

Exports of sawn softwood declined by 20% during the first half of 2020, mainly driven by curtailments in production. The end-product market outlook was very pessimistic in February – March.

However, volumes have moved surprisingly well as the demand has been better than expected – mainly in the European DIY and RMI segments. Also, ongoing construction projects have supported the demand. However, housing starts have started to show signs of weakening and it can be expected that the DIY market will cool for the winter months. Finnish exports to China have decreased by 17% mainly driven by weak prices and stalling demand after the virus epidemic. Demand in North Africa and Middle East has shown softness.

The sawn softwood stocks in Finland have stayed clearly below 2019 levels thanks to the active domestic markets. The demand has been driven by the DIY and RMI segments. People have spent more time and money at home – and make improvements during their COVID-19 lockdown days.

The status of the Finnish Sawmills is somewhat stronger than anticipated at the beginning of the year. However, the mills are burdened by high raw material and logistics costs and unsatisfactory market prices of sawn timber. The Central European massive supply of storm- and beetle damaged sawn softwood and logs, COVID-19 and volatility of foreign exchange and freight rates are challenging the Finnish mills.

The post Outlook of the Finnish softwood lumber industry in 2020-21 appeared first on Timber Industry News.