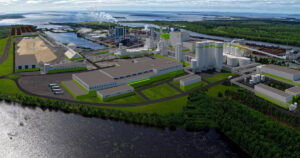 The new bioproducts mill will be the largest single investment ever made by the forest industry in Finland.

Forest products company Metsä Group announced Thursday that its Metsä Fibre division has decided to construct a new bioproduct mill in Kemi, an investment valued at 1.6 billion euros. The construction phase will take approximately two and a half years, and the mill is scheduled for completion during the third quarter of 2023.

The construction plan represents the largest investment ever made by the Finnish forest industry in Finland.

The new mill will replace current Metsä Group pulp production in Kemi and will be the largest forest-sector production facility in the northern hemisphere. The Kemi bioproduct mill is designed to produce some 1.5 million tonnes of softwood and hardwood pulp per year, as well as other bioproducts.

It will also generate 2.0 TWh of renewable electricity per year, equivalent to the annual electrical heating requirements of over 100,000 single-family homes.

Metsä Group says that the new Kemi mill will create around 1,500 new jobs across its entire direct value chain in Finland and increase the annual value of Finland’s exports by approximately half a billion euros.

Wood from Sweden too

“We estimate that it is possible to increase purchases there. As the increase in wood procurement is quite large, it is worth expanding the procurement area, ” said Ilkka Hämälä, President and CEO of Metsä Grpup, said at a press conference.

Although the aim is to procure trees mainly from thinnings, final felling also has to be done. The logs are estimated to accumulate about a million cubic meters a year, and are to be used at northern sawmills.

As logging is largely done on peatlands, the aim at final felling sites is to “cover solutions”, ie to use continuous cultivation. However, felling is always a matter for forest owners to decide, Metsä Group emphasizes.

The new mill, scheduled for completion during the third quarter of 2023, will replace Metsä Group’s current pulp production facility in Kemi.

The main implementation partners of the plant project are Valmet, ABB, AFRY and Fimpec. The construction will be carried out through customer-driven subcontracting, which will also enable smaller companies to be involved

Investments also in the board mill

A significant part of the pulp produced by the bioproduct mill is processed into linerboard on the mill site at Metsä Board’s board mill. Metsä Board has decided to increase the capacity of the liner plant – modernization and bottleneck investments will increase production by 40,000 tonnes.

In addition, Metsä Board will purchase a modernized unbleached pulp production line from Metsä Fiber with a capacity of approximately 180,000 tonnes per year.

“Following the investments, Metsä Board’s leading position as a manufacturer of coated white kraftliner globally will be further strengthened. The investment will significantly reduce the water and energy consumption of the Kemi board mill, ”says Mika Joukio, CEO of Metsä Board .

Metsä Group’s result last year was at most satisfactory, Ilkka Hämälä estimates. Comparable operating profit fell to EUR 368 million, with the decline in pulp prices being the biggest factor in the decline. Strikes in the early part of the year also weakened the result.

Net sales amounted to just over EUR 5 billion. There was a decrease of more than EUR 400 million.