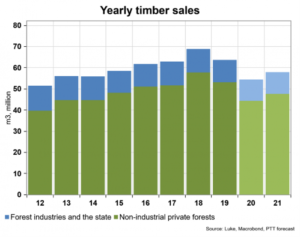 The industrial action reduced the use of wood in Finland in the early part of the year, after which the global economic downturn caused by the corona pandemic has reduced the production of the forest industry and thus the need for wood.

More permanent changes in the use of wood in different parts of Finland are caused by changes in industrial production capacity. The use of spruce pulp wood will be reduced by the closure of the Kaipola mill in Jämsä, but the start of board production in Oulu will increase the use of softwood pulpwood by half a million cubic meters. Other planned investments in the sawmill and pulp industries will not have a significant impact on wood use this year and next.

The increased use of imported wood further reduces the need for domestic wood. Finnish timber imports will increase by less than a tenth this year, rising to about one-sixth of the forest industry’s total raw wood consumption. Imports of birch pulpwood rose by more than ten per cent in January-June from the first half of last year, and imports of wood chips by as much as 26 per cent. Just over a third of wood imports are wood chips, which are largely imported from Finnish-owned and nearby sawmills in the absence of local demand. The Finnish forest industry also has harvesting operations in Russia as part of the timber supply, especially at production facilities close to the border. Birch fiber, which, in addition to wood chips, was excluded from the tariffs imposed by Russia in 2007, covers more than 40 percent of wood imports. Birch fiber is abundant in Russia in the vicinity of the border, while in Finland birch fiber is mainly collected from mixed forest stands for birch pulp production.

Russia has accounted for 76 percent of the volume of imported timber in January-June this year. President Putin’s recent announcement of a ban on timber exports from the beginning of 2022 would not apply to birch pulpwood and wood chips, which cover a total of 87 percent of wood imported from Russia. Imports of coniferous trees from Russia, which are subject to an export ban, collapsed after 2007. Imports of softwood fibers have fallen even lower in January-June this year. The share of softwood logs in wood imports is also small. With its WTO membership, Russia introduced in 2012 tariff quotas with reduced tariffs on exports of pine and spruce to EU countries.

However, the uncertain operating environment in Russia has not attracted a significant increase in conifer imports and the threat of an export ban will further reduce willingness. However, for individual sawmills, an export ban can be very important. At the end of last year, EU phytosanitary legislation also came into force, requiring a phytosanitary certificate for softwood imported from outside Europe. The position of the Baltic countries as import countries for softwood fiber is thus further emphasized. The Baltics accounted for 61 percent of softwood fiber imports in January-June this year.

In Finland, last winter’s poor harvest conditions led timber procurement to the load-bearing lands and within reach of the load-bearing roads, while some of the planned felling was left waiting for colder weather. Accumulated stocks have also been unloaded this year. The volume of fellings in January-July was 18 per cent lower than in the corresponding period last year. The rest of the year will smooth out the decline, and this year the total felling volume will fall by 15 percent. The biggest decline is in the harvesting of birch logs and fiber. The amount of wood accumulated from the acquisition of private forests will decrease by almost a quarter. The combined felling volume of the companies and Metsähallitus will decrease less than the felling of private forests, by less than five per cent. Demand, which recovered next year, will increase production and demand for domestic wood as well. Market fellings will increase by about 6 percent to 58 million cubic meters.

Finland’s timber trade will pick up again next year

Last year, the amount of stumpage sales in private forests decreased by almost a third from the previous year. The volume of trade fell clearly more than felling, so the stocks of stumpage sales accumulated in the forests in 2018 were dismantled. The number of acquisitions fell relatively less, by five per cent.

In the early months of this year, the timber trade nearly collapsed as strikes reduced timber use. By August, the stumpage sale in logs was less than a fifth behind last year. The market for pine logs has been clearly quieter than the market for spruce logs. In the pulp wood market, trade in pine pulpwood in particular has also decreased, but overall the percentage of trade in pulpwood was higher in January-August than in log trade compared to the corresponding period last year. As the timber trade slowed down in the autumn of last year, the total decline in stumpage sales volumes this year is nine percent compared to last year.

There is no similar recovery in procurement transactions, but the volume of timber sales will be just over one-fifth lower than last year. Next year’s trade volumes will rise ten percent from this year’s readings. This year and next, sales will focus more on regeneration fellings than in recent years. Imported wood meets partly the wood needs of the pulp industry.

The program of Prime Minister Sanna Marin’s government has set the goal of at least halving the use of peat for energy by 2030. The prevailing view in the peat industry is that driven by the market the use of peat for energy will decrease by a half even faster. The government’s goal is that industrial roundwood will not be diverted to energy production as the use of peat decreases. In the current forecast period 2020–2021, the reduction in the use of energy peat may not have a significant impact on the use and price of energy wood, but in the coming years it will, especially if energy wood replaces peat in energy production.

Slowdown in the timber market reduced timber prices, with only a slight increase next year

prices in the wood products industry. Instead, average annual pulpwood prices remained at the 2019 readings supported by pulp prices.

In January – August this year, the average prices of softwood logs have continued to fall by more than five per cent from the corresponding period last year. The fall in the price of pine logs is slightly steeper than with spruce logs. The price of pine pulpwood has also fallen relatively more than that of spruce pulpwood, although the price development of pulpwood has been more moderate than that of log wood.

The average annual price of logs in stumpage sales will fall by more than two percent this year compared to last year. The fall in the price of pine logs is the sharpest, more than four per cent, and the birch logs are more moderate. The development reflects the fall in export prices of sawnwood and the emphasis of exports to cheaper goods. Next year, the average annual prices of conifers will rise moderately from this year’s average price if harvest conditions in the early part of the year are normal for a winter.

The nominal annual average price of timber, calculated on the basis of volume-weighted average prices of timber grades, will fall by two per cent this year. Next year, the average stumpage price will rise slightly from this year’s average price.

This year, gross income from private forests will continue to fall by 18 per cent to around € 1.6 billion as wood prices, trade and logging fall. Next year, private forest revenues will rise by nine per cent from the current year as logging increases and wood prices rise slightly.