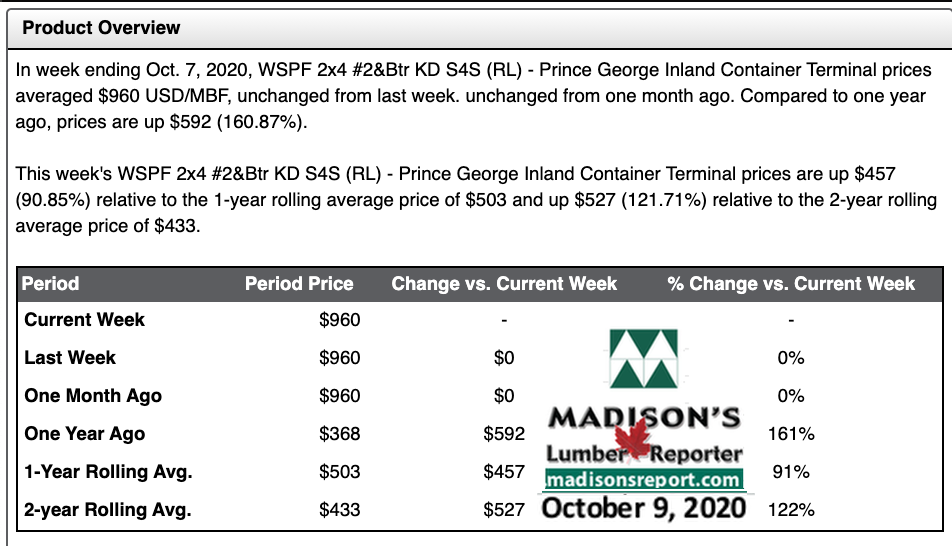 The Canadian Thanksgiving long weekend brought a not-surprising further drop in prices of most benchmark construction framing dimension softwood lumber commodities, as the days got increasingly shorter and the weather turned ever more winter-like. Demand across North America was almost entirely for small fill-in orders, while sawmills were preoccupied with locating shipments long-ago sent to customers but still not arrived.
The big question on the mind of industry players is, “Where is the softwood lumber price bottom and when will that arrive?” No one yet knows the answer for this, except to say it will be much higher and much later than in usual years. The latest lumber production and sawmill capacity utilization rates data release from the Western Wood Products Association — for July — shows a marked downturn in Canada. In the US, softwood lumber production continued to recover.
The all-important wood manufacturing volumes in Canada took a significant tumble downward in July 2020, after recovering nicely in May and June from terrible lows of April. This decrease in lumber available for sale after the supply constraints earlier in the year well explains why prices remained so high even until now. For more details on this timely and important information please go here: https://madisonsreport.com/2020/10/08/north-america-softwood-lumber-production-sawmill-capacity-utilization-wwpa-july-2020/ .

Prices continued to crash down in the Eastern S-P-F lumber market last week. A large contingent of buyers participated, but the focus was on Less-Than-Truckload orders from the distribution network at wildly varying – but resoundingly lower – numbers.
Overall sales volumes were strong but individual orders remained small as customers refused to take long positions in a falling market. Prompt wood became more common with each passing day as sawmills began to run into order files on a number of items, while production of bread and butter items were booked at around two weeks.

“Demand for Eastern S-P-F sheet goods was quiet last week. Customers were content to digest incoming loads – most of which were multiple weeks behind – and make deals with secondary suppliers who sold at prices five to six per cent below print to keep their inventories moving. Oriented Strand Board order files were into the week of October 26th, while Plywood production was booked as far out as late-November. ” — Madison’s Lumber Reporter