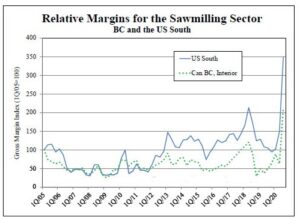 Times have been good for lumber producers in 2020, with profitability rising worldwide. Most important lumber producing countries have had their highest gross margins in at least two years, with North America standing out as the continent with the most spectacular profit improvements.

In the 3Q/20, US lumber prices reached record-highs, while sawlog costs generally did not move much. These developments resulted in sawmill gross margins (revenues from lumber and by products subtracted by the expenses of sawlogs) in Canada and the US reaching their highest levels since WRQ started reporting global sawmill profitability in 2005 (see chart).

In Central Europe, Austrian lumber producers have benefited from an oversupply of timber in the region and, as a result, declining sawlog costs. The other goods news for this industry has been that prices for exported lumber rose this fall.

The combination of these two positive trends has resulted in sawmills posting some of their highest earnings in over 15 years. The two major lumber producers in Central Europe, Austria, and Germany also benefited from expanded exports in the 3Q/20, with the q-o-q sales increasing by 61 million dollars and 86 million dollars, respectively.

Lumber manufacturers in Finland and Sweden have also experienced improvements in the export markets in 2020, with average lumber export prices increasing by 7% and 12%, respectively, from the 2Q/20 to the 3Q/20.

Revenues from byproducts were also higher in the fall, while sawlog costs increased only modestly, resulting in a rise in earnings for many sawmills in Northern Europe. Profits for Swedish sawmills were generally higher than Finnish mills in the 3Q/20, a comparative relation that has been in place for most of the past three years.