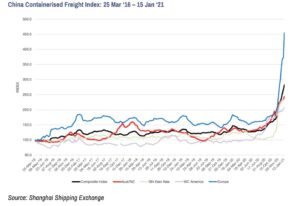 Global container freight rates continued to sky-rocket into the new year as major freight companies applied surcharges for premium service that some are calling ‘extortionate’.

Early January discussion with two major importers to Australia included comments that they were required to pay additional fees just to have the ocean freight company meet their existing commitments.

Having contracted for a certain number of containers to be shipped on an agreed date, with the goods delivered to port and cleared to load, some companies are being asked for additional fees, so their boxes get priority.

It is true not all face the same situation, but to be clear, these are contracts not being met, as though the company shipping to Australia is engaged in the spot market.

How does this come about? The answer is written in the chart, which shows the China Consolidated Freight Index (CCFI). The spot rates for shipping on most major routes ex-China have simply exploded as demand has erupted and shipping is constrained by port congestion, quarantine and what might be considered belligerence by some shipping companies. The chart below is an index only, not actual prices for container freight. That makes the price increases to Europe in particular, all the more difficult to comprehend.

Latest intelligence suggests that some costs have increased 800% for shipment from China to the United Kingdom. Albeit those are spot rates, the increase in costs is, by any measure, extreme.

There is little end in sight to this current situation, evidenced in part by the very low reported number of ‘blank sailings’ in the lead up to the Lunar New Year. Vessel commitments are being met, but loading commitments are less likely to be met, unless perhaps the premiums are paid.

Although the CCFI is the benchmark for movements into and from China, it is actually (and given the chart above, unbelievably) considered to understate shipping costs, with some companies paying the extra premiums to ensure their boxes – already paid for – are moved from congested ports on the scheduled vessel.