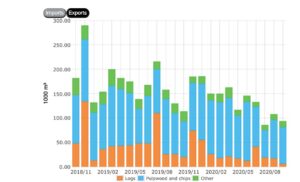 Of imported wood in January-October 54 percent was pulpwood and 35 percent chips. In the same period the imports of pulpwood decreased by two percent and of chips increased by 18 percent.