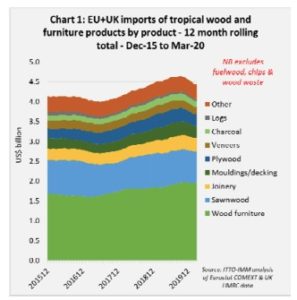 Having reached the highest level in more than a decade in October 2019, EU27+UK trade in tropical wood and wood furniture products slowed in the last two months of the year, a trend which accelerated in January and February this year. Contrary to expectations, with the large western European countries implementing COVID-19 lockdown measures during the month, EU imports of tropical wood products picked up again in March this year.

However, the rise in March is almost certain to be followed by a very large downturn in April and May with the shutdown of large sections of the European economy. During March, widespread reports emerged of timber importers putting existing orders on hold for 30 to 60 days and refraining from making new orders.

By the end of the month, importers were already struggling to deal with a build-up of stock that could not be shifted as manufacturers, retailers and construction sites went into lockdown. The only question now is just how far and for how long will trade decline in the months following March.

Given current uncertainty, the market position reported here cannot be taken as providing any real insight into future trends. Instead, it is better viewed as a picture of the baseline to measure the size of the expected fall when it inevitably comes.

Chart 1 shows twelve monthly rolling total US$ value of imports (to iron out seasonal fluctuations) from tropical countries into the EU27+UK of all wood and wood furniture products listed in HS Chapters 44 and 94 (excluding fuelwood, wood waste and chips).

After hitting a high of US$4.64 billion in October 2019, the 12-month rolling total fell to US$4.45 billion in February this year, a level maintained into March.

Chart 2 shows that the trend in import tonnage closely matches the US$ value trend (implying it is not only due to exchange-rate fluctuation). The 12-month rolling total quantity of EU27+UK tropical wood and wood furniture imports increased to a peak of 2.77 million tonnes in August 2019 before slipping back to 2.60 million tonnes in February this year, a level maintained into March.

The decline in European imports in the last quarter of 2019 and first two months of this year of course predates any COVID-19 influence and coincides with a period of broader slowdown in the EU economy. Both the eurozone and the EU27+UK grew only 0.1 percent during the last three months of 2019 compared with the previous quarter, according to official statistics, the EU’s worst performance since the beginning of 2013.

All of Europe’s largest economies deteriorated at the end of last year, Germany and the UK recording flat growth, and Italy and France seeing a 0.3% and 0.1% contraction, respectively.

European exports, widespread strikes in France over President Macron’s pension reforms, and weaker domestic demand for goods and services in Italy, alongside continuing political difficulties. During this period, the euro also continued to weaken against the US dollar, eroding the purchasing power of European importers.

Considering EU27+UK imports of tropical wood and wood furniture from individual tropical countries key trends in the period just prior to the onset of COVID-19 pandemic (in declining order of significance in total EU trade – see Chart 3) include:

Imports from Vietnam, which were flat in 2016 and 2017, increased consistently throughout 2018 and in the first nine months of 2019, before levelling off in the last quarter of 2019 and first quarter of this year. While EU27+UK imports from Vietnam continue to be dominated by wood furniture (HS 94), more recently there has also been growth in imports of a range of other wood products in HS Chapter 44, notably charcoal and other energy wood, plywood, laminated wood, planed sawnwood, and doors.

Imports of wood furniture from Indonesia made large gains in the second and third quarter of 2019 and maintained the high level through to the end of March 2020. In contrast to furniture, EU27+UK imports of plywood, wooden doors, and mouldings/decking from Indonesia slowed dramatically in the second half of 2019 after strong growth during the previous two years.

Imports of wood furniture from Malaysia also strengthened in the 12 months to March 2020, but at slower pace than for Indonesia and Vietnam. However, the gains made by Malaysian furniture were offset by a significant decline in EU27+UK imports of Malaysian sawnwood and plywood. Malaysia was losing ground to both Cameroon and Brazil in the EU27+UK market for tropical sawnwood, and to China, Indonesia and Russia in the market for hardwood plywood.

Imports from India were rising without interruption in the period before the onset of the COVID pandemic in Europe, hitting an all-time high of US$379 million in the year to March 2020. Import growth has been continuous in Germany, now the largest EU destination for Indian products.

Imports from India mainly consist of wood furniture made from local plantation species such as mango, sheesham, acacia and rubberwood, often in rustic styles which are hand-crafted.

EU27+UK wood imports from Cameroon, mainly sawnwood destined for Belgium, continued their rollercoaster ride, the volatility brought on by supply side problems, notably shipment delays caused by bureaucratic red tape and poor infra-structure after many years with little or no investment at Douala, the country’s only major port. Between March 2018 and June 2019, imports from Cameroon were rising, but then declined for the next nine months to end March 2020.

EU imports of tropical wood products from Brazil, comprising mainly of sawnwood and decking destined for France, Belgium and the Netherlands, increased strongly to a peak of US$286 million in the year ending August 2019 before falling back to US$251 million in the year ending March 2020. Slow growth in the domestic economy and the weak currency have encouraged exports from Brazil in recent years.

However, EU27+UK imports began to weaken from the middle of last year in response to Europe’s slowing economy and to tougher EUTR requirements imposed on operators to demonstrate negligible risk of illegal harvest for products originating in the Brazilian Amazon.

EU27+UK imports from Gabon were very volatile on a monthly basis during 2019 and first quarter of 2020, but overall, on an annual basis, were flat at around US$190 million. Imports into the EU from Gabon comprise mainly veneer, mostly rotary veneer used to manufacture plywood in France; sawnwood, much imported via Belgium; and plywood, which goes mainly to the Netherlands and Italy. EU27+UK imports of decking/mouldings from Gabon are still low but have been strengthening.

EU27+UK imports from the Republic of Congo (RoC), comprising sawnwood, logs and veneers, which were rising consistently throughout 2018 and 2019, were easing back in the first quarter of 2020 even before the onset of the COVID pandemic. Much of the recent growth in European trade with RoC has comprised logs and sawnwood destined for Belgium and veneers destined for France.

EU27+UK imports of timber products from Thailand consist primarily of furniture, with smaller quantities of plywood, fibreboard, and charcoal. The main European destinations are the UK, Germany and France.

Total EU imports from Thailand were stable at an annual level of just over US$100 million between June 2017 and January 2020 but showed signs of slowing in February this year even before the full effects of the pandemic became apparent.

There was uninterrupted increase in EU27+UK imports of plywood with a tropical hardwood face from China between January 2017 and September last year, with US$ value rising from US$50 million to over US$120 million during this period.

However, with a sharp deterioration in the European market for plywood at the end of last year, imports had fallen back to only US$88 million in the year to March 2020. Around two thirds of all EU27+UK imports of Chinese tropical hardwood faced plywood are destined for the UK.

After a period of stability in 2018 and the first half of 2019, the long-term decline in EU27+UK imports from Côte d’Ivoire resumed in the second half of 2019 and continued into the first quarter of 2020.

The recent decline has been particularly pronounced for veneers into Italy and Spain, and sawnwood into Belgium and the UK.

EU27+UK imports of wood products from Myanmar, after rising from US$35 million in 2017 to US$53 million in 2018, remained at this higher level throughout 2019 and the first quarter of 2020. Imports from Myanmar comprise mainly sawnwood with smaller volumes of mouldings/decking and veneer.

Imports from Myanmar have continued despite high profile EUTR prosecutions of importers of Myanmar teak (in Sweden and the Netherlands) and the conclusions of the EC’s FLEGT-EUTR expert group (most recently reiterated at their 12 December 2019 meeting) that “it is not possible to come to a negligible risk of illegally harvested timber from [Myanmar], in particular due to a lack of sufficient access to the applicable legislation and documentation from governmental sources”.

While imports from Myanmar into Germany, Belgium and the Netherlands fell to negligible levels in 2019, these declines were more than offset by a big rise in imports by Italy, Greece and Croatia.