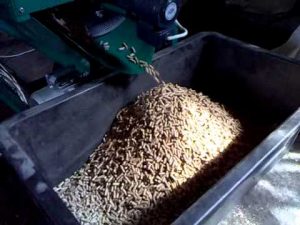 In a speedbump for the accelerating biomass industry in the European Union, the Dutch Parliament on February 25 voted to stop issuing new subsidies for 50 planned forest biomass-for-heat plants, a rare industry setback cheered by the country’s biomass opponents and shrugged off by the industry itself.

The vote came with a caveat: current annual subsidies of €578.5 million ($698 million) will remain in place for existing Dutch biomass plants — some 200 of which produce heat, while four power plants are co-fired with coal and biomass. The plants primarily burn wood pellets imported from the Southeast United States and Eastern Europe.

Dutch policy could change further, biomass critics say. The general election for the Dutch House of Representatives is set for March 17 and public opposition to subsidizing burning wood pellets to make energy stands at 98%, according to a 2020 Dutch survey by De Telegraaf, the country’s largest newspaper.

Maarten Visschers and Fenna Swart lead two separate conservation groups. They and others have aggressively lobbied Dutch elected officials for years to reduce the country’s dependence on woody biomass — which accounts for 61% of the heat and energy generated for the country’s 17.3 million people. They told Mongabay that the February 25 vote marked “a huge victory.”

“The vote came just before our national elections,” said Visschers of Leefmilieu (Environment). “The entire Parliament except the liberals voted for the motion (118-32) on the last day they were in session before the elections. Biomass burning is in the election (campaign) of every political party. There is a national climate demonstration on March 14, just before the election. Biomass will be an important issue on that day.”

The burning of forest biomass to make energy is becoming increasingly controversial, with scientists again and again debunking the long-standing industry and political claim that biomass is carbon neutral — what critics call a “carbon accounting loophole” that could, if not plugged, put the global climate at greater risk of destabilization.

Noting that the recent vote was limited in scope, Swart of Comité Schone Lucht (the Clean Air Committee) told Mongabay, “This step does indeed only concern new subsidies, but with this decision, the next step — stopping the existing and planned subsidies — is more logical and comes a lot closer. By declaring that new subsidies are no longer desirable until there is a definitive phasing-out trajectory, the government is forced to consider the end of all [biomass] subsidies. Continuing as usual has thus become a lot less likely.”

UN fears and Dutch politics aside, the market for wood pellets, especially from the U.S., the world’s largest producer, continues to grow.

Christian Rakos, president of the World Bioenergy Association, told Mongabay that Dutch conservationists have it all wrong. He stressed that his association’s members care greatly about healthy forests and that harvesting wood for bioenergy is done sustainably to maintain carbon stocks and promote forest growth. (NGOs counter that the majority of wood harvested for pellets is done with clearcutting by loggers, which destroys carbon sinks and ecosystems.)

“My take on the Dutch decision is that it is as wrong and poorly informed as the Brexit decision in the U.K.,” said Rakos, responding from Austria. “It is based on campaigns that have not told the truth. The fact is, the Netherlands is currently among the worst-performing countries in Europe when it comes to renewable energy use and this [biomass] decision will further deteriorate its performance in terms of climate protection.”

He added: “Our position is to do everything possible to ensure [forest] sustainability, but to keep in mind that climate change is the greatest threat to ecosystems at present, and that it will be impossible to mitigate it without extensive use of bioenergy.”