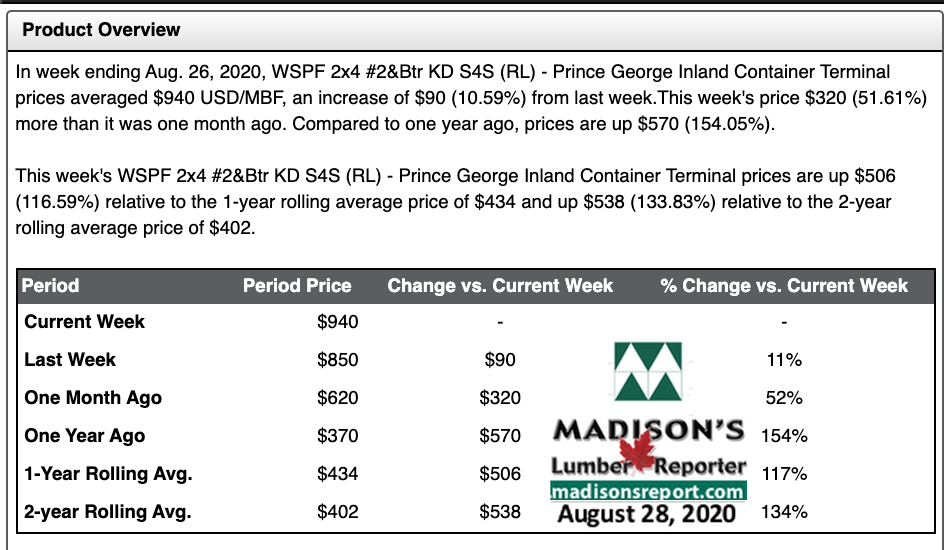 While North American softwood lumber prices continued to climb last week, there was a palpable reduction in the enthusiasm of buyers.

Normally by Labour Day end-users are well stocked up with the wood they need for ongoing building projects thus are not placing new orders for September or October delivery. However, all can agree that 2020 is anything but normal. Yet the fact of economic cycles and particularly seasonality can not be ignored. This week will tell — if early indications are anything to go by, at time of writing sawmills and secondary suppliers report a noticeable contraction in softwood lumber demand.
The latest US and Canadian home building, sales, and prices data has shown remarkable — indeed record-breaking — activity, with absolutely no signs of slowing down. In fact, the business of real estate across North America can truthfully be described as “red hot”.
Another notable development this year is an early, and so far quite severe, storm season in the US. If this continues through autumn, as many experts say it will, plywood demand for repairs and reconstruction will be very strong. Even if dimension lumber prices moderate downward to more “normal” levels, it is possible that panel (Plywood and Oriented Strand Board) will reach new price highs. Madison’s Lumber Reporter will be there to report immediately to readers if this is the case.

As lumber prices continued to reach ever-higher record levels last week, July sales of new single-family homes in the US beat market expectations by more than 12 per cent. Meanwhile, the World Trade Organization panel reviewing Canada’s appeal of softwood lumber duties found American claims of harm from unfair subsidization through Canada’s Crown tenure system largely unfounded. Elsewhere, California joined four other states in early adoption of the 2021 International Building Code, which includes provisions for mass timber structures up to 18 stories tall. Players of Western S-P-F in the US were at their wits’ end trying to find lumber and studs in a world of zero availability. Sawmill order files pushed into mid-October.
Canadian purveyors of Western S-P-F commodities described the continually-accelerating market as “pretty unbelievable”. Last week started with a comparatively slow Monday when the futures board was down, but that turned out to be a mirage and sawmills were back to selling out every morning before 7:30am, again leaving nothing available for buyers in the US cash market. Ravenous demand issued from both sides of the border and producers extended their order files further into October. Sales of low grade items gained more steam.

For the week ending August 28, 2020, prices of standard construction framing dimension softwood lumber items continued to rise, achieving levels beyond the scope of rational imagination. Benchmark softwood lumber item Western S-P-F 2×4 #2&Btr KD price gained another +90, or +11%, to US$940 mfbm (net FOB sawmill), from an already remarkable US$850 the previous week.
The price for this lumber commodity was up +$320, or +52%, from one month ago.
Compared to the same week in 2019, when this item was selling for US$370 mfbm, it is up +$570, or an astonishing +154%.

“As Eastern S-P-F sawmill availability remained virtually nonexistent, prices advanced yet again. Quick shipment was a thing of the past since secondary suppliers no longer had any real inventory to speak of. Sawmill order files were well into October. ” — Madison’s Lumber Reporter