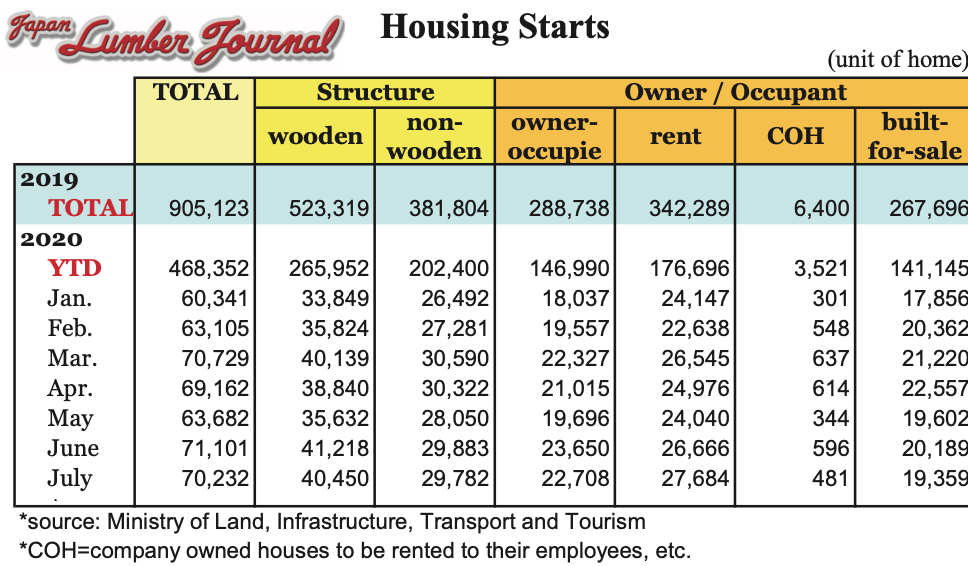 The USA purchases approximately 65% of Canadian lumber production, while Canadian buyers account for about 10%, and those in Japan take 6%.

However: US and Canadian customers purchase mostly standard grades (#2&Btr), while Japan buys almost exclusively premium or “appearance” grades (J-grade) which sells for quite a bit more than standard grade does.
It’s true that North American softwood lumber purchasing by China has increased massively since 20 years ago, but it is important to note that a lot of this wood does not go into home building or even construction. A significant proportion of this lumber is used to make crates, pallets, or packaging, or is remanufactured into other uses (railings, other). As such, most of Canadian and US wood imported into China is low-grade (#3 / Utility) with the requisite lower price of course.

According to a report released by the Japan Ministry of Land, Infrastructure, Transport and Tourism on August 31, Japan’s housing starts in July were 70,232 units (down -11% from the same month in the previous year), continuing to fall this time for 13 consecutive months, said the Japan Lumber Journal September 15. The seasonally-adjusted annual rate was 828,000 units, down -1.2% from the previous month.
By construction method, housing starts of 2×4 houses were 40,450 units (down -5%), decreasing for 12 consecutive months, while prefabricated houses were 9,624 units (up +1%), surpassing the previous year’s result for the first time in eight months.
By structure, Japan starts of wooden houses were 40,139 units (down -13%), and non-wooden houses were 29,782 units (down -9%). The ratio of wooden houses by the number of units was 57.6%, almost the same as in the previous month.

In Canada meanwhile, dropping for the first time in many months, for the week ending September 11, 2020, the price of benchmark softwood lumber commodity item Western S-P-F 2×4 was down -$6, or -0.6%, compared to the previous week, said Madison’s Lumber Reporter.
Prices for this construction framing dimension softwood lumber item is up an incredible +$214, or +29% from one month ago, when it was US$746 mfbm. Compared to mid-September 2019, this price is up an astonishing +$584, or +155%.

Last month, the upward trend of Canada housing starts proved to be an excellent forecast for US housing starts data which came out the following week.
Shrewd investors know that construction framing softwood lumber prices are a good leading indicator for US housing activity, including home building and home sales.