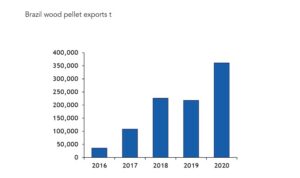 Brazilian wood pellet exports hit new highs in 2020, as deliveries to the UK nearly trippled and the number of export destinations rose.

Exports hit fresh highs for three of four quarters, with only April-June deliveries weaker on the year.

Brazilian producer Tanac operates a 400,000 t/yr facility in the south of the country and began delivering under a contract with UK utility Drax in October 2017, although these exports have never reached the full contracted volume.

Italy, the world’s largest importer of residential-grade wood pellets, was the second-largest recipient of Brazilian cargoes in 2020. Fourth-quarter exports to Italy rose by 22.6pc on the year to 65,000t, while full-year 2020 exports grew by 11pc to 171,000t, as Brazil increased its premium wood pellet production capacity.

There were 13 operational EN plus pellet production facilities in Brazil at the end of 2020, up from 10 at the end of 2019. And Brazil widened its export portfolio, shipping pellets to 15 countries in 2020, compared with just eight in 2019.