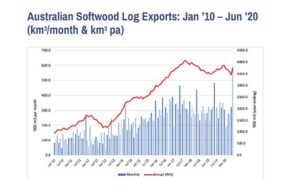 Australia’s softwood log exports exploded to a new monthly record in June, with total exports reaching a massive 590,689m, up more than 83% on the prior month.

To underscore the magnitude of the monthly record, this is more than 27% or 110,000 m higher than for any prior month.

Until May, exports had been softening for some months. As a result of the rise in May and the massive lift in June, exports for 2019-20 totalled 3.723 million m.

While that was 2.8% higher than a year earlier, the softening in late 2019 and early 2020 means annualised exports are still well below their 4.072 million m peak reached in September 2017.

Formal data confirmed vessel tracking data and industry anecdotes that indicated run away demand from Chinese plywood mills and sawmill customers, who are extremely active, acquiring all the resource they can.

Whether from Australia or New Zealand, buyers have been strong in the market, despite reportedly large inventories, over fears that pandemic induced close downs would short them of supply at some point in the second half of 2020. Given the situation in some parts of Australia, that concern does not seem entirely unfounded.