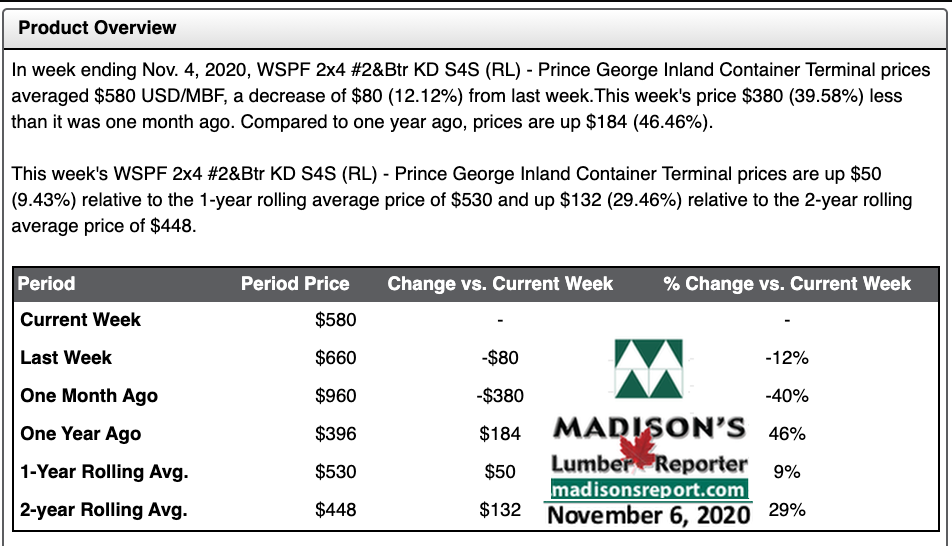 North American construction framing dimension softwood lumber prices did correct down a bit more last week, however demand remained quite strong for the time of year while supply was still quite constrained.

Customers called around to sawmills and secondary suppliers, at wholesalers and reloads, in search of the wood they needed for ongoing projects. Producers were still spending quite some time locating bits and pieces of wood for customer fill-in needs, but there was also a resurgance of new orders to put on the books.
Sawmill order files, which had been an unprecedented (for autumn) five weeks just last month, were down to two weeks or less. That is very strong for the time of year. Usually by November buyers can get prompt wood at any manufacturer.
Data for the US housing market — new building, sales, prices, construction employment and spending — are all up drastically compared to historical norms. A strong sales market for softwood lumber is expected to continue right through the Holiday Season and into the beginning of next year.
In the west, sawmills need the winter freeze to arrive sooner rather than later in order to be able to get trucks into the forest and logs into their yards.

Last week, Western S-P-F producers in the United States corrected their asking prices for what they hoped would be the last time this year. Scores of buyers found their trading levels or were otherwise forced off the fence by external factors that made them extra nervous about the depleted state of their inventories. The frequency of counter offers waned significantly as everyone seemed to be scrambling for the same wood pile all at once.
Sawmills still had prompt wood available late in the week but were confident they will be building an order file before long. Demand in November kicked off with a bang according to traders.

Western S-P-F sawmills in Canada described sales that came back hard last week after an October they’d sooner forget. Even as prices of #2&Btr dimension tumbled another $40 to $80, to land at what producers hoped would be the bottom, sawmill quoting levels were still historically high.
Players noted that a few swirling factors generated last week’s big buy-in; most notably uncertainty surrounding the US Presidential election results, a strong up-limit move in futures, and the November inventory tax cutoff for US customers.
One large producer declared Tuesday their biggest day of the year in terms of sales volume.

“Lumber, stud, and panel prices fell precipitously with stocking wholesalers in the US Northeast last week. Yards desperately worked through sales of accumulated high-priced wood previously acquired, but found mixed success while trying not to lose their shirts in the process. Competition was fierce and buyers remained circumspect, especially with print levels coming off in chunks week after week.” — Madison’s Lumber Reporter