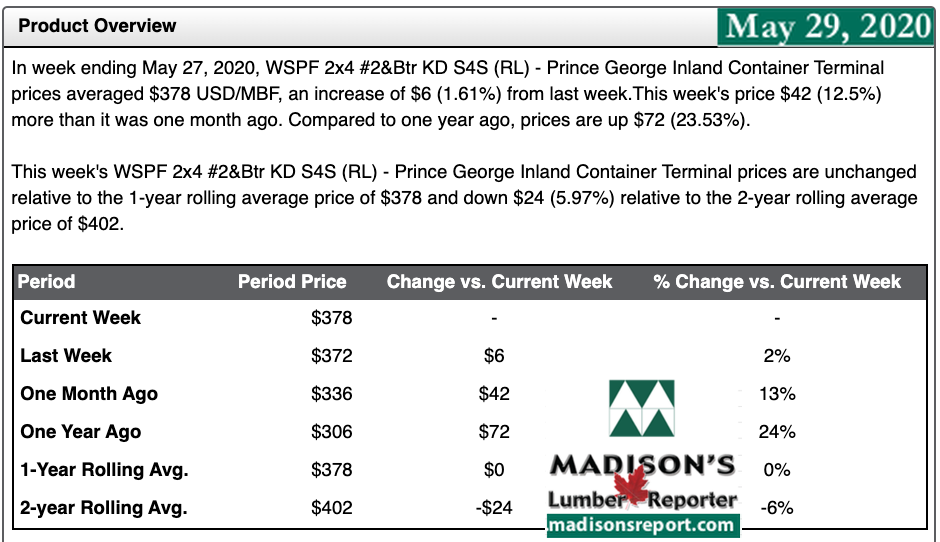 When times are uncertain there is one sure thing to provide insight into particulars; panel prices. Whether it be storms, fires, or otherwise, among the most-needed items in society is plywood. Given the current situation in many regions of the US, it is assured that demand for plywood and other panel sheathing is going to increase in the short-term.
There are much fewer producers of this essential building material than there are regular sawmills of North American construction framing dimension softwood lumber. As well, input costs for wood panel products are much higher.
A spike in demand, whether for immediate repair needs or longer-term rebuilding, for Plywood and Oriented Strand Board (OSB) always causes a surge in price.
If it is a brief, sudden circumstance, plywood prices will pop for three weeks or so then settle back down. If for a more long-term impact (for example: rebuilding an entire town after forest fire) wood panel products will sell at higher prices for a longer time.

The prices of Canadian OSB 7/16” — the benchmark item among North American wood panel commodities — where already greatly improved over one year; in large part due to mergers, consolidations, and other attrition among existing panel production facilities in the past couple of years.
As for dimension lumber, 2×4 studs and standard grade (#2&Btr) dimension lumber items were again in short supply compared to demand.
Sawmills across the US and Canada had trouble processing enough volume to keep pace with ravenous customers; as production was affected by reduced staff, rotating shifts, and other conundrums caused by augmented return-to-work restrictions.

Looking at structural framing softwood lumber, Tuesday was when Canadian WSPF sawmills started to really move product, selling out of bread and butter items at incrementally increasing prices as soon as any volume came available.
Consequently sawmill order files were into the week of June 22nd, with vanishingly little supply available for June 15th.
Demand was especially strong for straight lengths and 4- and 6-inch high line, as home centres and treating plants were very busy. Late shipments were common, but not due to transportation issues. Production volumes were the culprit; getting sawmills back to normal capacities with labour restrictions still in place caused operational headaches.

“While producers in the East tried to bring as much ESPF capacity as possible back online, construction markets on both sides of the border roared to life thus demand overwhelmed available volumes. While sawmills focussed on re-establishing optimal production, distributers and wholesalers were especially busy covering the needs of desperate customers last week. Inventories at all levels of the softwood lumber market were scant to begin with.” — Madison’s Lumber Reporter

The above table is a comparison of recent highs, in June 2018, and current May 2020 benchmark dimension softwood lumber 2×4 prices compared to historical highs of 2004/05 and compared to recent lows of Sept 2015: