What will be the trend of wood prices in N. America in 2021? 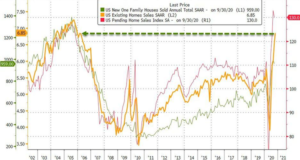 In 2020, the North American lumber prices have gone in unexpected ways while coming out from an exceptional situation. Softwood lumber prices recently rose to US$960 per thousand board feet, and it even exceeded US$1050 per thousand board feet for a short period. After the major sawmills in North America experienced capacity reductions in the early 2020s, and then after the roller coaster-like market in the third quarter, they achieved a lot more than expected profits. So, next spring, will North American lumber prices fall again after bottoming out? Perhaps we can start from the perspective of the American housing market.

Just this week, the financial report of US mortgage lenders showed that the third quarter was the highest single-quarter performance in 20 years, and US housing prices experienced the largest increase since 1991. The US National Association of Realtors announced last Thursday that the average transaction price of second-hand homes hit a new record of US$313,000, a 16% increase from the same period last year. The number of homes for sale in the United States has reached the lowest value ever recorded in the past 40 years. This is an important reason for promoting housing prices to grow much faster than income.

According to the National Association of Realtors (NAR), the median price of single-family homes in the United States increased by 12% in the third quarter of 2020. Bloomberg reported that this increase was 12%, the highest year-on-year increase since 2013.

Housing prices in every metropolitan area tracked by the association have increased year-on-year, with double-digit growth in 65% of areas. NAR said the stock of single-family homes for sale in October fell to a 2.4-month value, the lowest level since records began in 1982. The shortage of housing stocks has pushed up house prices across the country.

According to data from the U.S. Census Bureau, since 1959, the United States has built an average of 1.5 million new houses each year. However, in the past ten years, only 900,000 housing units were built each year, resulting in such a tight supply in the US real estate market today. But today, in the context of a sharp reduction in the supply of housing in the United States, and the extremely low borrowing costs, builders have quickly recovered their confidence and the pace of housing construction in the United States has accelerated.

In addition, the influx of young home buyers has also contributed to the boom in the US housing market. According to NAR data, the proportion of millennials entering their thirties accounted for more than 50% of mortgage loans for the first time in recent times, driving the strong growth of the US housing market. In 2005, the number of young Americans owning housing reached its peak, but it fell to a record low in the following ten years, and only slowly recovered in the past two years. Some analysts believe that if the housing ownership rate of young people in the United States returns to the historical average, the United States will usher in the largest housing market boom in history.

The boom in the property market has directly promoted the boom in the overall construction market in the United States since the third quarter. In November, the National Association of Home Builders and Wells Fargo Housing Market Index, which measures the confidence of builders, rose 5 points to 90, the highest record since the index was launched 35 years ago. The index exceeded 80 for the third month in history. The index has a score of 0-100 and measures builders’ views on current single-family home sales and their sales expectations for the next six months.

In the future, under the influence of the pandemic, more people will need to work at home, which will lead to an increase in housing demand. There will continue to be a huge demand for housing raw materials, and more housing demand will shift to low-density markets such as suburbs and outer suburbs. It is undeniable that in the future, US housing construction will still maintain a relatively high speed. This will provide strong support to the lumber market in the first quarter of next year.

In summary, although lumber prices have declined in the off-season, there are signs of a recovery in this the end of the year, and they will surely gain market support after prices return to a relatively reasonable range. It is unlikely that North American lumber prices will fall again in the next 3-6 months.

The post What will be the trend of wood prices in N. America in 2021? appeared first on Timber Industry News.