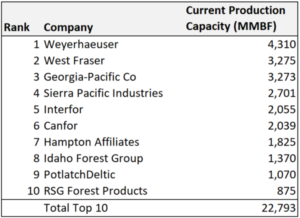 Softwood lumber producers had a wild ride in 2020. From major cutbacks in the spring in response to the COVID-19 pandemic to pushing production limits in the fall to capture record high lumber prices, mill operators made many short-term adjustments. In addition, firms continued capital projects and rationalized capacity across the U.S. and Canada.

Weyerhaeuser ranks number one for lumber production capacity in 2020, followed by West Fraser. Three Canadian firms – West Fraser, Canfor, and Interfor – make the top 10 list. Interfor has U.S. mills in the South and West, while West Fraser and Canfor only have a presence in the South.

Georgia-Pacific made the most changes since last year, including opening the greenfield mill in Albany, Georgia and starting up the mill rebuild at Warrenton, Georgia. The company moved to #3 on the list, up from #4 last year. GP also idled the mill in Dequincy, Louisiana. Interfor sold the sawmill in Gilchrist, Oregon to Neiman Enterprises, reducing Interfor’s U.S. capacity.