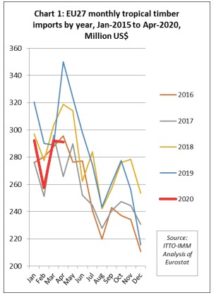 Despite all the large western European countries implementing COVID-19 lockdown measures starting in the second two weeks of March, and mounting supply-side problems in tropical countries, total imports of tropical wood and wood furniture products into in the EU in April were little changed compared to the previous month.

Unfortunately, this is not a good news story. The signs are that the EU market for tropical wood products was weakening well before the effects of COVID-19 were even apparent.

The lack of evidence so far of a further downturn in direct response to the COVID-19 outbreak is likely just a reflection of the long lead times in the tropical wood supply chain.

Chart 1, which shows the value of EU27 imports of tropical wood and wood furniture products reported monthly during the last five years, highlights that imports in 2020 were closely mirroring imports in 2016 and 2017 to the end of April.

Given widespread reports during April of EU importers struggling to deal with a build-up of stock that could not be shifted as manufacturers, retailers and construction sites went into lockdown, a more significant decline in imports may well be seen in the May and June trade figures.

More positively, it should be said that the DIY sector in the EU remained quite buoyant in some countries throughout the lockdown months with many people taking the opportunity to carry out home improvement work.

In other EU countries with less stringent lockdowns, such as the Netherlands and Sweden, commercial construction and some manufacturing activity also continued, at a slower pace but without interruption.

Chart 2 shows that in all tropical wood product groups, there was no significant downturn in EU27 imports in March and April this year. In fact, imports of some product groups, such as sawnwood, mouldings/decking, and veneer, increased during this period compared to the previous two months.

EU imports from tropical countries are typically highly volatile from month to month, and often show no consistent pattern (Chart 3), making it difficult at this stage to assess the likely longer-term effects of COVID19. However, the contrasting trends in monthly imports from the two largest tropical suppliers to the EU – Indonesia and Vietnam – provide some insights.

EU imports from Indonesia, which are dominated by garden furniture, decking and plywood, tend to be strongest in the spring season.

The sharp decline in imports from Indonesia in April this year, at a time when trade is usually rising, does not bode well for the rest of 2020.

In contrast to Indonesia, imports from Vietnam are dominated by interior furniture and tend to be strongest at the turn of the year, in time for the January sales, and to be very slow during the summer and early autumn.

In that sense, Vietnamese suppliers have been more fortunate because the lockdown in EU countries

occurred after a large proportion of shipments to the EU in a typical year had already arrived. The import data also shows that quite a lot of shipments from Vietnam continued to arrive in the EU during April.

The full effects of COVID-19 on EU imports from Vietnam will only become truly apparent later this year when the products for next season begin (or fail) to arrive.

Chart 4 shows that there was no unprecedented downturn in imports of tropical wood products into any EU27 country in the month of April this year. In fact, imports were higher in Belgium, France and Italy in April than in the previous month. There was a decline in Germany and the Netherlands, but not inconsistent with previous monthly changes.