Vietnamese wood products exports stunning in the first half 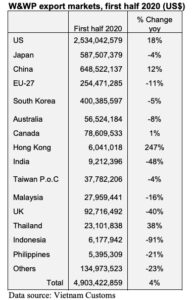 According to Vietnam Customs, at the end of June, wood and wood product (W&WP) export revenues amounted to US$4.903 billion, 4% up compared to the same period of 2019 and 22% higher than in May. The W&WP export growth over the first 6 months of 2020 demonstrates the strong resilience of the Vietnamese wood industry despite the impact of COVID-19 control measures. The US, China, Japan, South Korea and EU are the top destinations for Vietnamese W&WP exports.

As the top market the US accounted for 52% of total export revenues or US$2.53 billion, up 18% year-on-year in the first half. In particular, exports to the US in June increased by 42% compared to May.

The Japanese market consumed US$587.5 million in exports equivalent to 12% of total W&WP export revenue. In June, export to Japan rose US$75.57 million but this was 9% down against May.

Exports during June have been reported as US$ 56.39 million, 27% down compared to May.

W&WP export to other markets including Australia, India, Taiwan P.o.C, Malaysia, UK, Indonesia and the Philippines declined during the first half of 2020, while exports to Hong Kong, Canada and Thailand grew.

The export of these 5 commodities made up 92% of the W&WP export revenue during the first 6 months of 2020.

Wooden furniture: The export of this group of wooden products generated US$2,25 billion in the first half 2020, 6% higher compared to the same period of 2019 and accounted for 46% of W&WP export

earnings. Of significance is that June exports of wooden furniture increased 48% over the previous month.

Chairs: Chair exports alone were valued at US$0.93 billion a 10% year on year rise. In June, chair export stood at US$203.3 million, 51% higher than that was recorded in May.

Woodchips: The value of woodchip exports earned US$0.81 billion, 6% down year-on-year and contributed 16% to total W&WP export earnings. Woodchip exports in June were valued at US$88.7 million a decline of 21% compared to the previous month.

Plywood/Laminated wood: Exports of these wood-based panels earned at US$0.34 billion, a 6% year on year rise. In June, plywood/laminated wood product exports fell 29% compared to May.