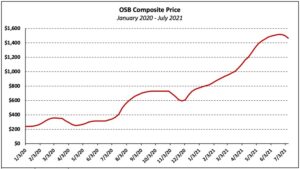 The price of OSB has increased 510% since January 2020, exceeding the peak price increase in lumber by nearly 180 percentage points in the USA, as the National Association of Home Builders (NAHB) reported.

Although plywood panel prices have substantially increased over the past 18 months as well, the increases have been less than half those seen in the OSB market. In addition to elevated prices, acute shortages have plagued the residential construction industry — particularly after the severe winter weather experienced in the south in February.

Prices and price fluctuations vary depending on use and location, with increases since the start of 2020 exceeding 650% for some OSB products.

OSB accounts for the most wood product used in structural panel applications in new construction. For example, OSB accounted for roughly two-thirds of wood panels used in wall sheathing in 2019.

Depending on the location of a build, the thickness of OSB sheathing in wall applications is generally 3/8″ or 7/16″ (with some use of 15/32″). The mill prices of these dimensions (shown below) have climbed an average of 491% since January 2020. The “delivered” price of 3/8″-thick OSB sheathing in Portland, Oregon, has climbed an incredible 662% over the same period.

Oriented strand board is heavily relied upon in roofing applications as well. Roof sheathing comprising OSB made up nearly two-thirds of all roof sheathing in 2019.

OSB sheathing used in roofing is typically 7/16″ and 15/32″ thick because it is intended to resist “racking,” resulting from high winds or earthquakes, and support heavy snow loads. In areas with minimal snow loads, building codes may allow for the use of 3/8″ OSB.

As lumber prices recede, more attention must be given to the stratospheric price level of OSB.  OSB, like framing lumber, is an integral home building material. The wide usage of OSB in new home construction should lead the market to shine a greater spotlight on OSB prices and scarcity.

The post US OSB prices increased by 510% since the beginning of the year appeared first on Timber Industry News.