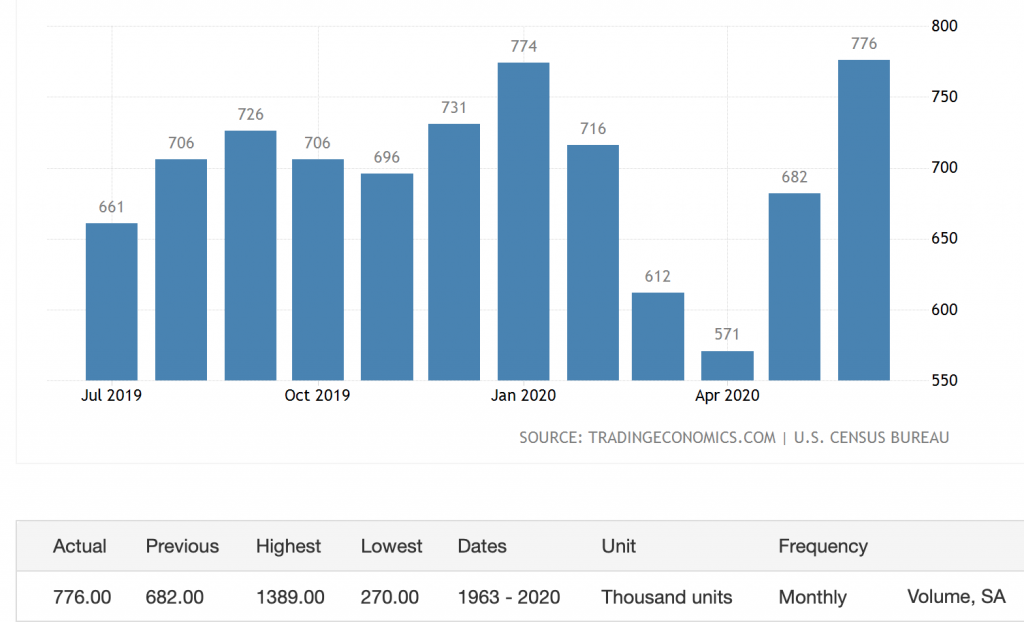 A huge bounce for both New and Existing home sales in the US in June 2020 provided some well-needed positive movement for the US economic condition:

The median price of new homes, which make up about 10% of the market, was US$329,200 in June. That is +5.6% above the price one year ago.
There were 307,000 new homes estimated to be up for sale, which equates to a tight 4.7-month supply. A 6-month supply of homes is generally considered to be indicative of a balanced market.

A separate report also Wednesday from the US Mortgage Bankers Association showed applications for loans to purchase a home increased +2% last week from a week earlier.

Sales of previously owned houses in the US jumped +21% from the previous month to a seasonally adjusted annual rate of 4.72 million units in June 2020 from a near decade low of 3.91 million in May

Year-on-year, existing home sales, which make up about 85% of U.S. home sales, dropped -11.3%.
Single-family home sales advanced +20% in June.
There were 1.57 million previously owned homes on the market in June, up +1.3% from May and down -18% from a year ago.
Based on the current sales pace, that represents a four-month supply. Last June 350,000 more homes were on the market.

“The resilience of home prices, particularly given the rise in mortgages delinquency rates and increased use of forbearance, has likely pulled many investors to the sidelines.” — Mark Vitner, Wells Fargo Securities

The median existing house price increased +3.5% from a year ago to a record US$295,300 in June, the US National Association of Realtors said.