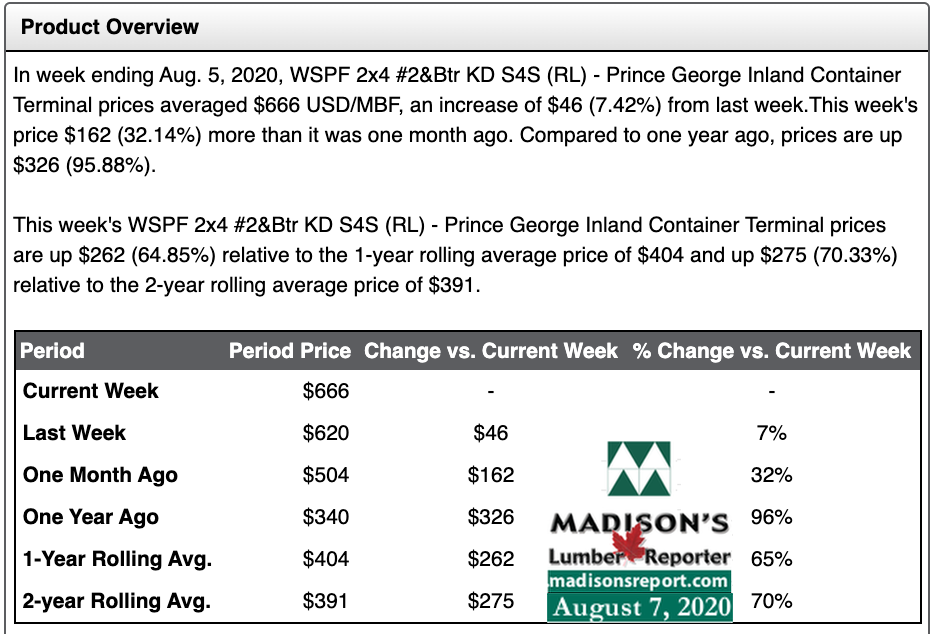 Sawmills across Canada and the US are either running at full capacity or working to ramp-up production after the new social-distancing rules from the Covid-19 restrictions were put into the place. Meanwhile, US housing — construction, sales, and prices — is heating up only more and more. All this at a time of year when home builders and contractors have already ordered and are receiving the wood they need for projects ongoing through September.
Suffice to say: no one knows what is going on, except that demand is non-stop and there just isn’t enough wood on-hand with suppliers to keep up. Order files at sawmills, whether in the West, the East, or the South, were all firmly into September. Customers looking for wood now have to wait until mid-September before that production is even booked at sawmills, then even longer to receive delivery.

Buyers of Western S-P-F in the US were getting used to picking their jaws up off the floor each week as softwood lumber prices rose again to meet or surpass previous record highs. In the face of these unprecedented new levels, demand remained strong as ever according to traders. Sawmill order files stretched into September on most items, with increasingly late rail car arrivals adding multiple weeks to those timelines. A general tone of frantic urgency continued to dominate the market as customers jumped on any scrap of wood they could find, regardless of species. Availability at all levels was basically nonexistent, with wood coming in and going out too fast for players to build inventory.
The wild ride of Western S-P-F in Canada continued last week as #2&Btr 2×4 climbed another $46 to US$666 mfbm. Standard grade and High Line dimension all increased by double digits as sawmills were again aggressive with their numbers and still received no pushback from buyers. After demand in Canada paused briefly the previous week it came roaring back, quickly cleaning out large producers every morning before they could offer any cash wood to US customers. With secondary suppliers unable to build any inventory, players don’t anticipate a correction to prices in the near future. Order files at sawmills were into early September, and shipment delays caused further frustration.

Demand in the Eastern portion of the continent was extremely strong again last week. Sawmills raised their asking prices on #2&Btr Eastern S-P-F dimension between $40 and $55 in the Great Lakes market and $45 and $55 in the Toronto market. Hectic sales activity and inquiry were the norm, and buyers desperately grabbed any material they could find. Early September order files were commonly reported by sawmills and customers knew they wouldn’t receive their orders until at least two weeks after that.