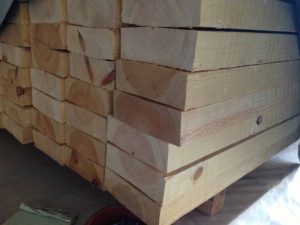 In its latest newsletter, Danske Bank has taken a closer look at the Swedish sawmills’ corona boom and how long it can last. Despite the fact that the sawmill industry is earning really well right now, high inventory levels reduce the willingness to pay forest owners.

The fact that the demand for sawn wood products and the willingness to pay for them is incredibly high right now has hardly escaped anyone. According to Danske Bank, the Swedish sawmill industry is currently in its fourth boom in 70 years. After the Korea boom, the raw materials boom and the China boom, now is the corona boom that prevails with record high export prices for sawn wood products, which is described by many as a crazy market.

Danske Bank states that consistent data from the Swedish sawmill industry shows a continued good economic situation where no turnaround is seen before the winter, which guarantees very good profitability levels.

The Swedish sawmill industry reached a new production record in March with 1.9 million cubic meters of wood produced. At the same time, Danske Bank believes that the sawmills envisage an extreme shortage of wood products after the summer and the market is described as insatiable. But fears of an equally rapid downturn are growing in the industry.

In the US market, according to Danske Bank, wood product prices fluctuate “like a cryptocurrency” and after a price peak of USD 1,670 / board ft, prices turned sharply down, to just over USD 1,400. This is a price increase of 250 percent compared to the normal level, which according to the bank makes it about twice as profitable to sell to the USA as to Europe.

The price increase for sawn wood products in Sweden is around 50 percent and continues to rise. According to the sawmill managers that Danske Bank spoke to, the market is literally crazy right now, where the willingness to pay is almost unlimited to satisfy the end customer.

Price increases of well over SEK 1,000 / m3 and prices on certain ranges of more than SEK 5,000 / m3 beat the previous boom prices of around SEK 3,000 / m3. Something that Danske Bank is looking at with some astonishment is that most Swedish sawmills calculate with continued price increases of 15–30 percent during the second quarter.

It is above all the spruce timber that has soared in terms of price. According to Danske Bank, the fact that the pine did not hang with the price rally is largely due to the fact that the strong pine market in North Africa and also China has slipped behind the grandominated markets in the US and the UK.

According to Danske Bank, when the price differences between spruce and pine become too great, there is a so-called substitution effect, where the expensive spruce is replaced by the cheaper pine. At the same time, the price for lower qualities are also rising.

The question is how long this “all time high” can last, but the Swedish sawmill representatives that Danske Bank spoke to do not see any signs of a turnaround before November. However, there is a nervousness that the swing, if it comes, can be fast and sharp. According to Danske Bank, now that all players around the world are sawing as best they can, the risk of a rapid and sharp turnaround also increases.

Swedish sawmills’ earnings and operating margins during the first quarter have increased significantly as a result of the sharp rise in prices compared with previous years, and Danske Bank believes that the companies surveyed land on operating margins for the full year of 20, and in some cases up to 30 percent in 2021 Operating profit which is also strengthened by the fact that no major price increases for timber are to be expected.

Danske Bank has spoken to a number of sawmill companies that have given their views on the market, including Jesper Rudbäck, CEO of Handelshuset Trätälja.

”Our main product is pine and the focus of our business is in the MENA area (Middle East North Africa). The prices of pine have not hung with the spruce wood during the rapid rise where the USA and UK have driven the market. But at the end of March a change took place and now the pine buyers accept the situation. The average price has risen by about 25% from late March to early May. Buyers are now screaming for goods, but sawmills often have nothing to sell. I have never seen anything like this,” he says.

At Derome, there is speculation about what could cause the market to tip over, and here no price increases are planned for forest owners.

”I think that the strong demand will last at least until the turn of the year, but of course you go and think about what makes the market collapse. Is it that we do not get goods, that it becomes too expensive or that inflation sticks out? If the interest rate increases, many construction projects will be blown off. In southern Sweden, we have high timber prices and a good timber flow. Now we are not planning any increases. The risk for us is that, as usual, we have far too expensive timber,” says CEO Magnus Andersson.

This is a problem for forest owners who probably sold their timber too cheaply in the initial price increase, which filled the sawmills’ stocks. Danske Bank believes in smaller price increases, far from what forest owners believe and hope for as a result of the currently good timber supply with inventory levels of 12 percent above the average levels for Q1 over the past eight years.

According to the bank, the southern Swedish timber prices are at record levels, with Södra raising the normal timber price for spruce and pine by SEK 120 / m3fub and SEK 60 / m3fub, respectively, since last summer. The price picture in southern Central Sweden is colored by the large supply as a result of the bark beetle infestations, and the price difference compared to southern Sweden is on average SEK 150 / m3fub. Something that has contributed to increased exports to get better profitability.

When it comes to pulp, both SCA and Södra have raised prices on the European market, and the prices of cardboard and so-called liner are also increasing. Here, according to Danske Bank, however, one begins to see a hint that the peak has been reached and that prices are culminating. At the same time, the bank believes that prices that do not rise do not necessarily mean that they will fall, but that it may well be a break or a stabilization.

However, according to the bank, it is not possible to turn a blind eye to the fact that the leading indicator of a future fall in prices is that prices in China are no longer rising.

According to Danske Bank, what drives the pulp price is difficult to say, but the development of Chinese futures and spot prices, global producer stocks and the expansion of new pulp production that could lead to an oversupply can provide both short-term and long-term indications.

The pulp price has also brought the pulpwood price up, mainly in southern Sweden, where Södra raised prices by a total of SEK 50 / m3fub, including a thinning premium of SEK 25 / m3fub. Something that has surprised Danske Bank is Mellanskog’s and Holmen’s price increases in Central Sweden of between SEK 20–30 / m3fub, despite the industry having a good supply of pulpwood. Northern Sweden looks set to once again be without price increases.

According to Danske Bank, Stora Enso’s closure of pulp production at Kvarnsveden and Ortviken’s restructuring will lead to a temporary reduction in the need for fiber by around two million cubic meters in central Sweden. But in a few years ‘time, the bank believes in a hardening market when Ortviken starts up again, Stora Enso has expanded its mill in Skoghall and Metsä’s new investment in Finnish Kemi has gained momentum. Despite some uncertainty about pulpwood, Danske Bank advises continued thinning and also clearing.