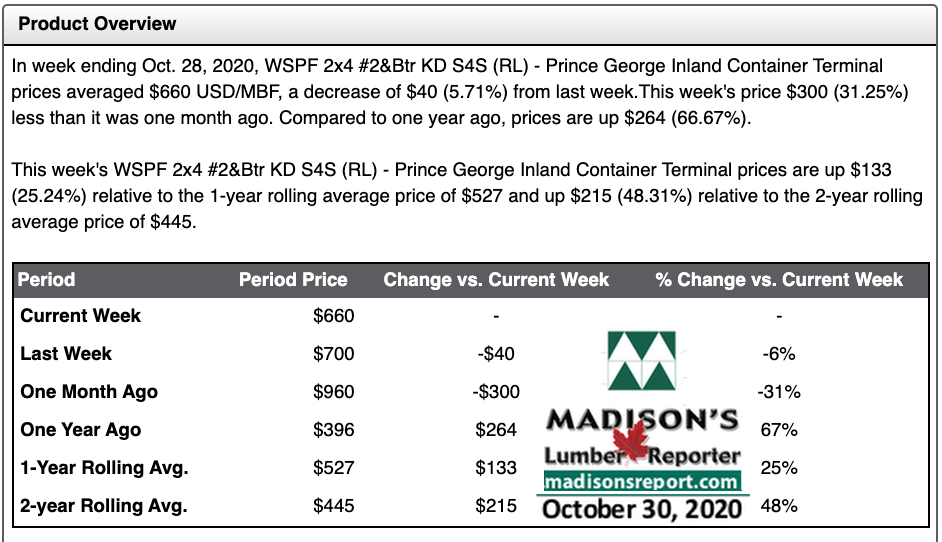 After some big drops last month, the price of most North American construction framing dimension softwood lumber commodities fell further last week but by smaller amounts. The supply-demand balance seems to be correcting, due to ongoing strong customers appetite even as the usual autumn slow-down for building activity is upon us.

Sawmill order files have been reduced to mere days, which is normal for this time of year. As prices were plummeting in recent weeks customers delayed purchases in the hopes that supplier quotes would fall further, however many could not delay ordering much-needed wood.
This provided sellers the opportunity to keep prices somewhat aloft. A two-tier market has formed, as secondary suppliers (wholesalers, reloads) offered wood at much lower prices than lumber manufacturers did.
Log supply remains good as most lumber manufacturing facilities however there are rumblings that in the British Columbia north some sawmills are having trouble getting logs into their yards.

Producers of Western S-P-F commodities in the US were under more pressure last week to adjust their asking prices to tradable levels. Order files at sawmills marched closer to prompt and a large contingent of buyers impressively continued to sit on their hands even as their inventories ran down to pavement. Sawmills remained aggressively in search of orders and increasingly amenable to deep counter offers to keep their wood moving to buyers. Still, sales volumes were low.

While Western S-P-F sawmills in Canada maintained a tenuous two-week order file on bread and butter #2&Btr items, availability of short stock and other accumulated widths and grades started to pop up all over. As prices continued to pull back – between $20 and $80 in standard and high grade – sawmills were able to get some sales traction. Despite the overall endemic lack of wood in downstream inventories, sawmills had to fervently seek business all week and accept deeper counters than they may have anticipated.

“Eastern S-P-F sawmills in Canada ended last week by taking deep counter-offers to sell off much of their accumulated wood. According to many accounts, availability of some items was drying up even at the secondary supplier level, forcing some customers into scramble-mode when trying to fill specific holes in their perpetually-depleted inventories.” — Madison’s Lumber Reporter