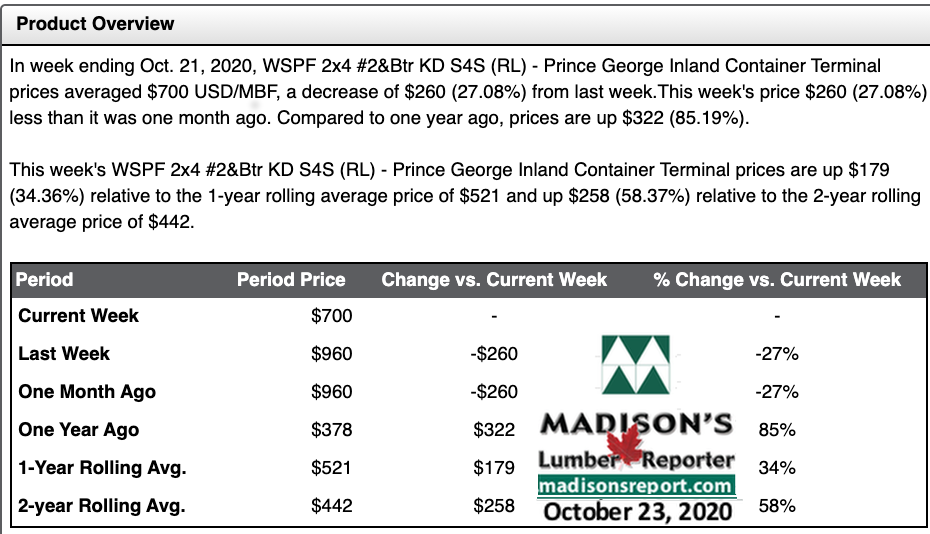 “What goes up must come down,” as the saying goes. Particularly when talking about markets.

After holding firm for four weeks while most other species’ prices fell, the price of benchmark construction framing dimension softwood lumber item Western Spruce-Pine-Fir KD 2×4 #2&Btr fell a not unexpected -$260, or -27%, to end last week at a still-high US$700 mfbm (net FOB sawmill). Producer order files were down to two weeks or less, which is still quite strong for this time of year, thus sawmills were not able to reject counter-offers as easily as they had been for most of this year. While demand remained strong, it was — once again — mostly for fill-in orders and highly-specified loads. Customers and suppliers alike were still spending most of their time chasing down previously-ordered wood which has not yet arrived.
What a difference a week makes. The lower prices of last week might seem severe compared to the week before, however lumber industry players have been expecting a big drop. For the past month there has been a wide variety in sawmill offer price lists; depending on the manufacturing rate and range of supply at each individual facility. Secondary suppliers were selling wood at this new lower price for a few weeks already.

Western S-P-F producers in the US slashed their prices last week in an effort to jump-start more sales, with mixed success. Most buyers saw the writing on the wall and continued to wait and see how deep this correction can go. Secondary suppliers were again the main repository of fill-in business. Sawmill order files were up to two weeks out on bread and butter items, with most other commodities showing prompt availability.
Canadian Western S-P-F sawmills were seeking a longer order file last week as buyers remained on the sidelines for the most part. Asking prices plummeted between -$107 and -$292 on standard and premium dimension. Low grade items fell between -$10 and -$70 since those never rallied to the insane highs of the former. Availability of 2×4 #2&Btr maintained at a two-week order file but all other Western dimensions and grades were at market. Demand was flat on both sides of the border.

“Stocking wholesalers on the US Eastern Seaboard were adamant that the market cracked last week. Customers kept their hands in their pockets and bought little, even as they remained very busy with consumption and construction projects following the significant materials-shortage through summer. Vendors were desperate to sell before the end of the month as similarly desperate buyers held off steadfastly so they wouldn’t have to pay for deliveries until the end of November. ” — Madison’s Lumber Reporter