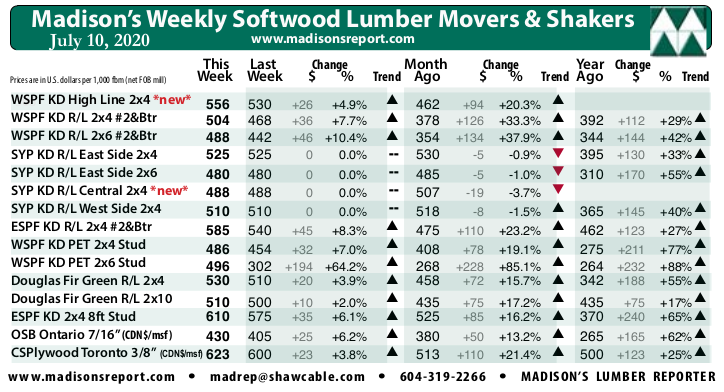 While demand for construction framing dimension softwood lumber continued to surpass supply last week, it was noticeable that buyer orders to sawmills were slowing down. Indeed, customer interest seemed to shift from the benchmark Western Spruce-Pine-Fir to the East Side, as prices of Eastern Spruce-Pine-Fir increased by more than that of Western.
Demand for plywood, meanwhile, was unabated for reconstruction following social unrest about racial inequality.

Western S-P-F producers in the US reported another stellar week during which they wished they had more material to cover unceasing inquiry from buyers. Retailers were frustrated with late shipments but were also aware that little could be done about pandemic-caused shortages of transportation equipment and labour.
Canadian Western S-P-F producers saw business intensify last week as Canadian customers continued to swoop in and buy up every speck of wood, before any folks in the US could get to it. Without batting an eye at #2&Btr prices – which were up $22 to $46 again last week – one large producer was sold out before 8:00am, leaving the US wholesale market wanting. Sawmill order files were at least four weeks out on all dimension lumber items.

“Sellers of Eastern S-P-F in the US reported increasing cases of substitution; as customers desperately snatching any wood they could find regardless of species or designation.” — Madison’s Lumber Reporter

As in the West, Eastern S-P-F suppliers noted that buyers had gotten used to not worrying about asking prices and instead were focussed on the simple concept of availability. Players couldn’t think of a commodity that wasn’t rabidly sought after, and any scrap of leftover inventory held by a sawmill or wholesaler was jumped on with alacrity. Lumber producer order files pushed into the back half of August as the acute shortage of wood stirred up desperation among buyers.