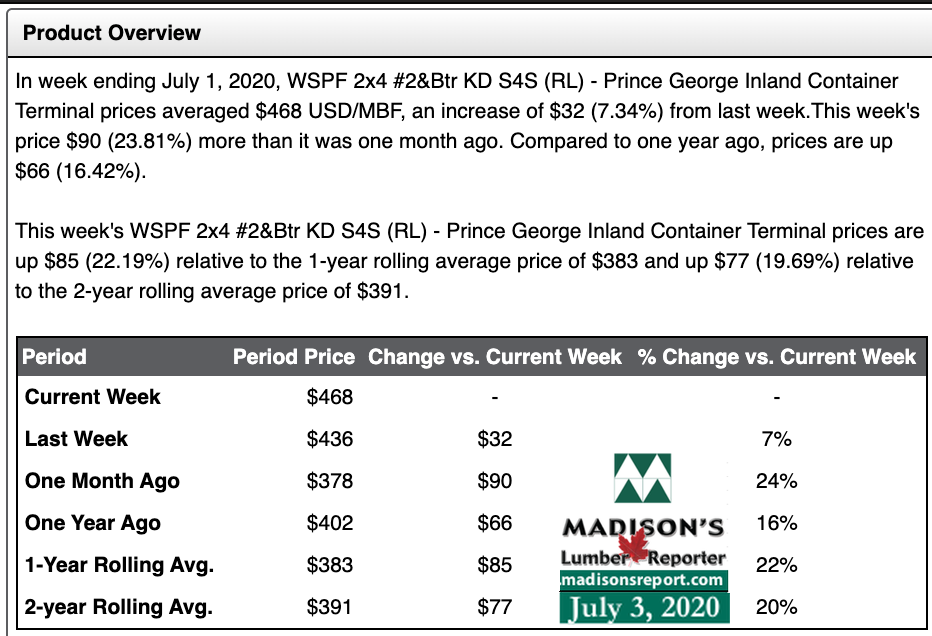 At this time of year it is usual for softwood lumber prices to be lowering, as end-users would be stocked-up on inventory needs for ongoing building projects, and sawmills would be slowing down as normal seasonal closures and curtailments come into effect. However, this year — having largely stopped production during spring as industry responded to Covid19 infections — softwood lumber producers across North America are still operating at relatively high capacity levels. Inventories in the field remain sketchy to weak and lumber manufacturers continue running at higher-than-normal production levels for the time of year, to try to feed buyer hunger.
Prices, of course, have responded according. While beginning to rise well above this time last year, the price of most benchmark construction framing dimension softwood lumber items are far below mid-2018 levels. This week the price of Western Spruce-Pine-Fir KD 2×4 #2&Btr again rose significantly. Particularly in the Western region standard wood building materials prices are up +7%. As prices of this commodity approach levels of March 2020, these rises are expected to slow as more long-delayed deliveries arrive to customers daily. While order files at sawmills are claimed to be 3 weeks, demand lately has mostly been for small volumes of very specific items.

Demand for Western S-P-F in the United States remained steady last week even as players on both sides of the border celebrated their respective national holidays. Suppliers were confident that business will improve even further this week after everyone gets back to their desks and sawmill orders start flowing again with increased fervour. Asking prices continued to rise.
According to Canadian Western S-P-F producers, there was no change in the pace of demand from the previous week even though many folks took long weekends in view of Canada Day and Independence Day. Buyers in Canada continued to get to sawmills’ wood piles before US customers even got a whiff, and prices kept climbing. Sawmill order files were to the week of July 27th and were pushing into August.

“Even the Canadian and American national holidays couldn’t slow down red hot demand in the market this week.” — Madison’s Lumber Reporter