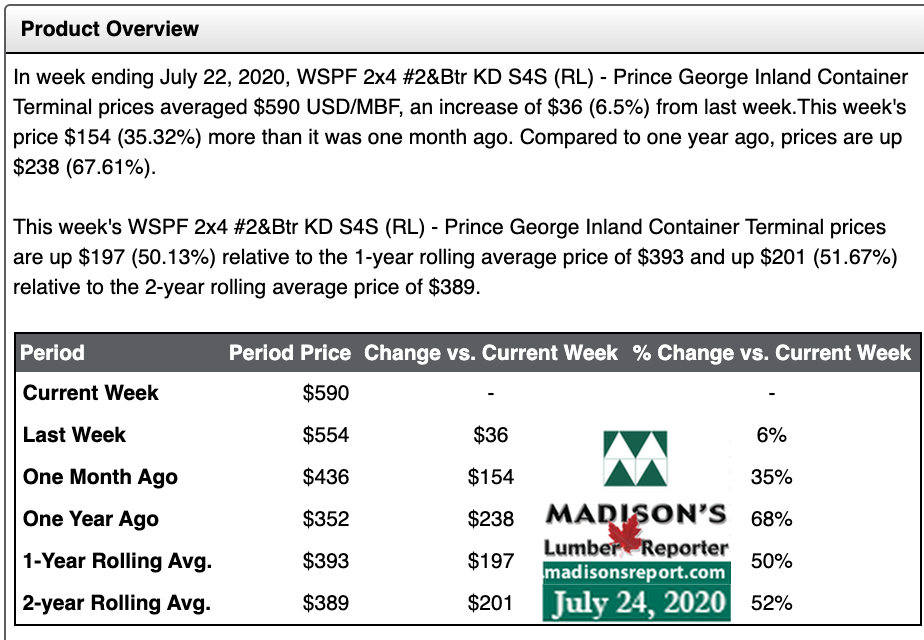 Further to these updates earlier in the season by Madison’s, on June 6, “Wood Panel Prices Will Provide Indication of Remaining Summer Lumber Demand” and June 24, “Plywood Prices’ Major Surge While Most Softwood Lumber Prices Moderate,” once again last week the movement of plywood prices, slightly down, let’s us know what will likely happen with North American construction framing softwood lumber prices this week and next.

In dimension lumber meanwhile, sales were a bit slower last week according to Western S-P-F purveyors in the US, yet prices continued to rise and availability of commodities remained extremely limited. Inventories at all levels were strapped and contractors scrambled to find enough material to keep jobsites going. Producers reported sawmill order files into the latter half of August. Secondary suppliers continued to scare up deals above print, as many desperate customers were willing to pay anything to ensure quicker shipment than sawmill-direct.
Even as many buyers stepped away from the market to digest incoming stock last week, Canadian suppliers of Western S-P-F lumber remained extremely busy. Monday and Tuesday were especially highlighted as slightly slower days last week, but the context in which sawmills described that relative drop helped. “We sold out in minutes instead of seconds,” they explained. Sawmill order files underscored the strength of the market, extending into the week of August 24th.

Eastern S-P-F lumber dealers were again agog at the unrelenting demand from customers in the East. So little material was available – and prices so insanely high – that some buyers were switching from Spruce to Douglas-fir to save a few bucks. All species remained in exceptionally tight supply as inventories-on-hand were decimated at all levels.