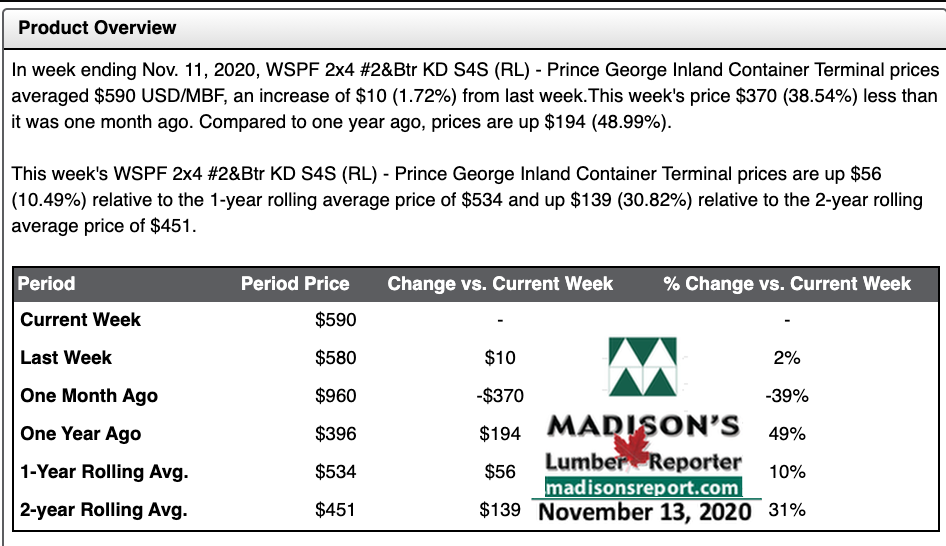 After a few weeks of seeming free-fall, most lumber prices stabilized last week as the supply-demand balance corrected nicely. Suppliers in Canada and the US saw more orders coming in as end-users continued to run on extremely weak inventories. Buyer reluctance in the past few weeks, while prices were falling and production remained high, evaporated. Customers could no longer wait to see if prices would fall further. Sawmill order files actually grew, for some products even into December which is quite unusual for this time of year. Producers fielded customer calls with glee, and looked forward to the US Thanksgiving holiday next week — which is usually the end of substantial lumber sales across North America until the beginning of the following year.
As has been said in many quarters in recent months; this is not a normal year and no one knows how 2020 will end. One thing is certain, as of mid-November there seems to be no stopping of demand for solid wood products and wood building material.

“While prices of lumber and studs bottomed or bounced, OSB tanked, and plywood prices looked to be cracking.” — Madison’s Lumber Reporter

A sense of urgency developed last week among buyers of US Western S-P-F. The market appeared to be reversing and persistently bare field inventories lit a fire under customers’ collective cheeks. A resultant rush of business cleaned out most of the volume accumulated by both primary and secondary suppliers. Sawmill order files were pushed to at least two weeks out, with virtually nothing left for earlier shipment by the end of the week. Considering the already-delayed state of rail cars, limited availability at all levels, and the fact that buyers had not built up inventory to see them through the winter, producers had expected to subsist on consistent hand-to-mouth business into Spring.

Last week manufacturers of Western S-P-F in Canada were able to harness the sales momentum they saw developing the previous week, keeping firm on pricing for materials they didn’t push and selling at new levels. Prices of standard-grade, #2&Btr 2×4 R/L, and utility-grade #3 2×6 R/L, each climbed $10 to US$590 and US$300 mfbm respectively. Demand wasn’t isolated to a few pockets either, as buyers from every corner of North America jumped in to cover their depleted inventories when they saw the market turn. Sawmill order files were all of a sudden into the week of December 7th, with prior availability drying up quickly on all other items.

“Eastern S-P-F lumber sales began last week on a high note as buyers sensed a bottom had been hit and went in hard to cover their empty inventories. As the week wore on wholesalers and mills both ran out of material quickly.” — Madison’s Lumber Reporter