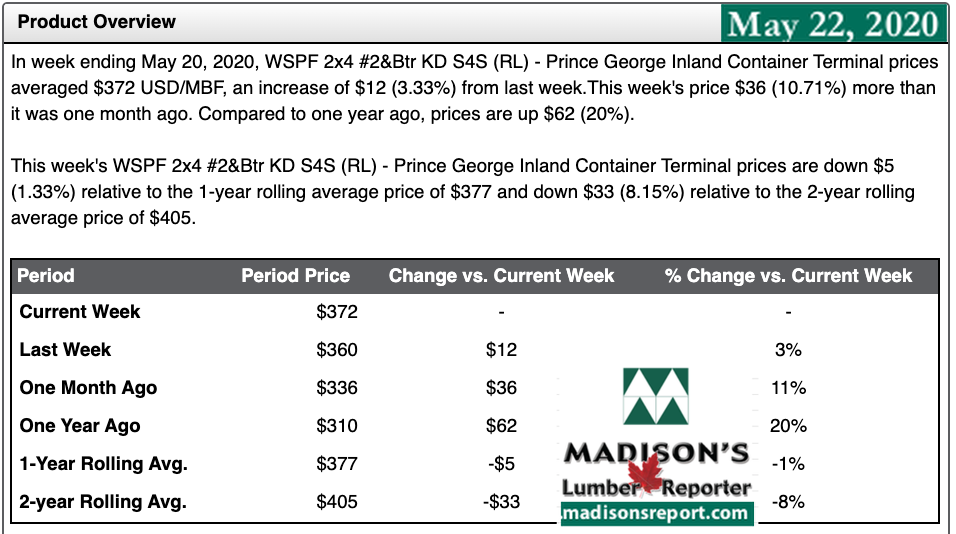 Sawmills across North America looked toward the end of summer last week, as lumber prices continued to rise but sales volumes were unsteady. Lumber producers in the US and Canada considered this current market strength as temporary, and were already making plans for seasonal slow-downs when summer draws to a close.
Softwood lumber producers consequently pushed up their asking prices and extended sawmill order files into mid- to late-June.
Prices were nudged up every day as sawmills sold out of stock with ease, and at higher levels. Customers throughout the market were very underbought, and field inventories remained low even as many buyers abandoned their caution and tried to secure volume. Sawmill order files were into the weeks of June 15th and 22nd. Bread-and-butter sizes continued to garner consistently strong demand, while sales of 2×8 and 2×10 were also really hot. As construction in Texas was roaring, 2×4 R/L #3/Utility sold particularly well.
For the week ending May 22, 2020, the price of Western SPF 2×4 kept rising, this time up +$12, or +3%, to US372 mfbm compared to the previous week when it was US$360. Prices for this benchmark construction framing dimension softwood lumber item were up +$36, or +11% from one month ago.
Compared to the same week in 2019 when it was US$310, this price is up +$38, or +13%.

“Ravenous builders emerged as construction activity restarted, exposing the considerable lack of softwood lumber supply that has developed at all levels of the market.” — Madison’s Lumber Reporter

Looking at structural framing softwood lumber, Western-Spruce-Pine-Fir studs continued to be massively undersupplied as pandemic restrictions were lifted and building activity in North America came to life. According to producers in British Columbia, the price of 2×4-8’ studs jumped up $22 to US$392 mfbm. Supply was gone in a flash. Demand for all other trims was feverish also; aside from 2×6-8’s, which remained at $268 and just couldn’t get any sales traction.
Even as many stud mills began to ramp up their production levels following periods of curtailment, overall production could only cover a fraction of rapidly-mounting demand.

The above table is a comparison of recent highs, in June 2018, and current May 2020 benchmark dimension softwood lumber 2×4 prices compared to historical highs of 2004/05 and compared to recent lows of Sept 2015: