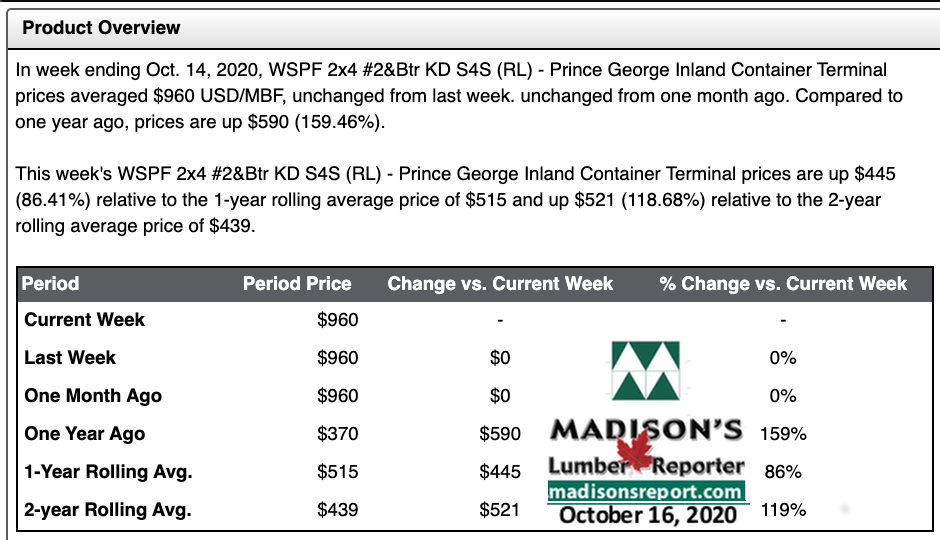 Last week producer and wholesaler dimension softwood lumber prices across North America dropped, as expected for this time of year. However, US housing starts data for September 2020 is incredibly strong, so the expectation is that — given ongoing very high demand — asking prices will not approach the low levels of 2019. It is safe to say that a price floor has been reached, although where exactly that will land remains to be seen. Madison’s Lumber Reporter expects that by US Thanksgiving this year, we will know the “new bottom” for lumber prices, and that January 2021 will see a return to hot demand for construction framing lumber commodities.

The sales price of most softwood lumber continued their recent drops last week, except benchmark items Western S-P-F KD 2×4 R/L and benchmark panel commodities Oriented Strand Board and Plywood (Ontario). This suggest an ongoing sellers market, and that producers are able to sustain manufacturing volumes based on their sawmill strong order files. Suppliers don’t need to lower prices to close sales; instead focussing on making wood already ordered and getting previously-sold materials out to waiting customers. The biggest pickle right now remains to be transportation, as trucks are still difficult to source and expected rail cars are not arriving.

Producers of Western S-P-F commodities in the United States reported flat pricing last week as overall demand was stalled. Prompt availability popped up with increasing regularity as both primary and secondary suppliers dealt below print levels when terms seemed prudent. While prices were flat from the previous week’s levels on dimension, studs took a tumble as stud mills tried to entice reluctant buyers. Demand remained strong in most regions with pent-up construction activity robust where weather permitted, but new purchases last week were infrequent as customers instead focussed on digesting incoming wood.
It was another quiet week according to Western S-P-F lumber producers in Canada. The trend of cautious customers sitting on their hands and waiting for previously-booked orders to arrive persisted, and suppliers spent much of the week tracking down shipments for irate buyers. While sawmills held their dimension prices firm at the previous week’s levels, wholesalers and distributers captured the majority of fill-in sales with more flexible pricing and quicker shipment times.

For the week ending October 16, 2020 the price of benchmark softwood lumber commodity item Western S-P-F KD 2×4 #2&Btr continued to remain firm, at US$960 mfbm, said Madison’s Lumber Reporter. This price is unchanged from one month ago. Compared to one year ago, this price is up an amazing +$590, or +160%.

“Western S-P-F sawmills in the US enjoyed two-week order files, while those in Canada were running wood ordered three weeks ago. Order files at each were shrinking as supply caught up with demand, however normally for this time of year order files are approximately 3 days so prices for benchmark Western Spruce-Pine-Fir are not expected to drop significantly any time soon. ” — Madison’s Lumber Reporter