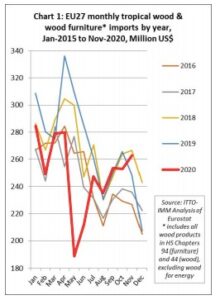 Total EU27 (i.e. excluding the UK) import value of tropical wood and wood furniture products was US$2.75 billion between January and November last year, 10% less than the same period in 2019. This is a significantly higher level of import than forecast earlier in the year when the first waves of the COVID-19 pandemic hit the continent.

The high level of EU27 tropical wood product imports in November is encouraging and was unexpected as it coincided with signs of severe stress in the EU market in the last quarter of 2020. According to the EU’s Winter 2021 Economic Forecast published on 11th February, GDP in the EU increased by 11.5% in the third quarter of 2020 before contracting by 0.5% in the fourth quarter as the second wave of the pandemic triggered renewed containment measures. According to the Forecast, EUwide GDP is estimated to have declined 6.3% in 2020.

The Forecast notes that “Europe remains in the grip of the coronavirus pandemic. The resurgence in the number of cases, together with the appearance of new, more contagious strains of the coronavirus, have forced many Member States to reintroduce or tighten containment measures”.

According to the latest data from the Oxford “stringency index”, which records the strictness of ‘lockdown style’ policies to limit the spread of COVID-19, in mid-February strict lockdown conditions were still in place throughout most of Europe. These measures are now expected to be in force in many European countries at least until midMarch.

According to the EU Winter forecast, the EU economy is expected to contract in the first quarter of

2021 but economic growth should resume in the spring and gather momentum in the summer as vaccination programmes progress and containment measures gradually ease. An improved outlook for the global economy is also set to support the recovery. The EU economy is projected to grow by 3.7% in 2021 and 3.9% in 2022.

The economic impact of the pandemic remains uneven across Member States and the speed of the recovery is also projected to vary significantly (see GDP chart below). In Germany, the EU’s largest economy, GDP declined 5% in 2020 and is projected to increase 3.2% in 2021 and 3.1% in 2022. The depth of economic decline and speed of recovery is projected to be greater in several EU countries including France, Spain and Belgium.

Italy, which suffered a particularly sharp decline in GDP in 2020, is expected to recover more slowly than all other EU countries. In contrast, the fall in GDP in the Netherlands in 2020 was less severe than in other western European countries and the recovery in 2021 and 2022 is also expected to be stronger.

The EU Winter Forecast notes that “risks are more balanced since the autumn, though they remain high. They are mainly related to the evolution of the pandemic and the success of vaccination campaigns. Positive risks are linked to the possibility that the vaccination process leads to a faster-than-expected easing of containment measures and therefore an earlier and stronger recovery”.

It goes on to suggest that “NextGenerationEU, the EU’s recovery instrument of which the centrepiece is the Recovery and Resilience Facility (RRF), could fuel stronger growth than projected, since the envisaged funding has – for the most part – not yet been incorporated into this forecast”.

On the downside, “the pandemic could prove more persistent or severe in the near-term than assumed in this forecast, or there could be delays in the roll-out of vaccination programmes. This could delay the easing of containment measures, which would in turn affect the timing and strength of the expected recovery. There is also a risk that the crisis could leave deeper scars in the EU’s economic and social fabric, notably through widespread bankruptcies and job losses. This would also hurt the financial sector, increase long-term unemployment and worsen inequalities”.

Forward looking indicators show that economic momentum in the EU27 is unlikely to increase in the first quarter of 2021. The IHS Markit Eurozone Composite Purchasing Managers Index (PMI) declined from 49.1 in December to 47.8 in January. Any score below 50 indicates that a majority of those surveyed recorded a decline in purchasing during the month. Services were the principal drag on economic output, with activity here falling for a fifth successive month in January. Manufacturing remained the principal bright spot of eurozone economic performance, expanding for a seventh successive month in December, albeit at the lowest rate in this growth sequence.

Underlying data signalled reduced construction output across each of the three sub-sectors monitored by IHS Markit; housing, commercial and civil engineering. At the national level, German and French firms reported further declines in construction activity, with the latter recording the sharpest contraction since last May. Moreover, Italian firms signalled a renewed, albeit marginal decline in activity in January.

That said, according to IHS Markit, construction firms in the eurozone appeared optimistic regarding the outlook for activity over the coming 12 months. Confidence turned positive for the first time since July 2020, as hopes for a broad recovery in the construction sector were underpinned by positive vaccine news.

Unsurprisingly, EU27 imports of all the main tropical wood products fell in the first eleven months of 2020, but in each case the decline was less dramatic than expected earlier in the year when the scale of the pandemic and associated lockdown measures was just becoming apparent. The recovery in imports also strengthened in November for all product groups and in all EU countries, with the exception of Italy.

In the year to November, EU27 import value of wood furniture from tropical countries declined 7% to