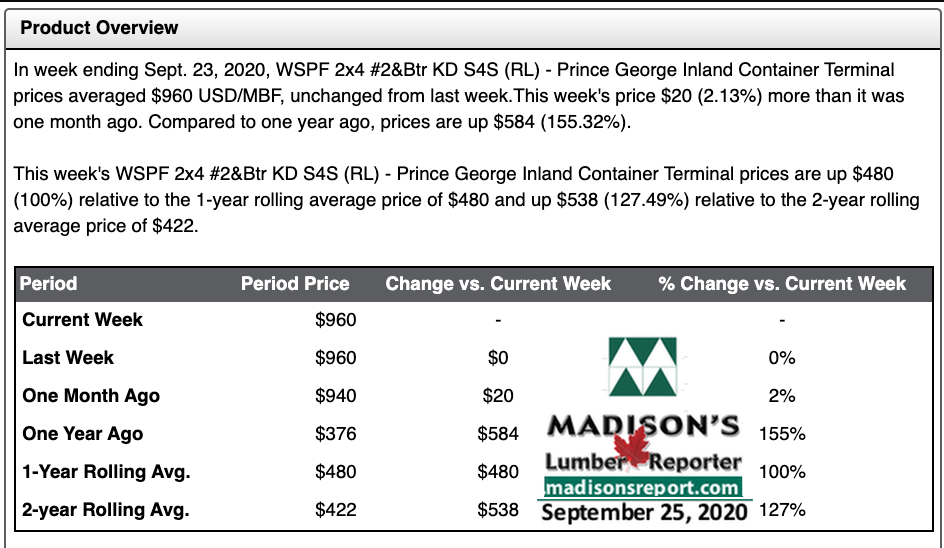 There was more confusion in the North American construction framing dimension softwood lumber market last week as prices of most home building solid wood commodity items stayed flat, except Eastern S-P-F which did correct down somewhat. The supply-demand balance seemed to be finding an even keel, although customers still were reluctant to make big purchases at unprecedented highs. The latest US data for housing starts, home sales, and house prices all show phenomenal increases, indicating very strong demand for real construction and remodelling projects could keep prices up for a while yet.
Privately-owned US housing starts in August were at a seasonally adjusted annual rate of 1,416,000, the US Commerce Department said September 17. This is -5% below the revised July estimate of 1,492,000, but is +3% above the August 2019 rate of 1,377,000. Total starts were up +3% year-over-year compared to August 2019. The dip in housing starts was driven by a -25% decline in multifamily construction activity. Single-family housing starts in August were at a rate of 1,021,000; this is +4% above the revised July figure of 981,000. Single family starts were up +12% year-over-year.

Elsewhere, the US Commerce Department said Thursday new home sales rose +5% to a seasonally adjusted annual rate of 1.011 million units last month, the highest level since September 2006. New home sales are counted at the signing of a contract, making them a leading housing market indicator. New home sales are up +43.2% from August 2019. There were 282,000 new homes on the market in the US last month, down from 291,000 in July. At August’s sales pace it would take 3.3 months to clear the supply of houses on the market, down from 3.6 months in July. About 71% of the homes sold last month were either under construction or yet to be built.

“Eastern Canadian lumber and stud producers reported slower sales activity last week as buyers who would have pounced on loads a couple weeks ago began to vacillate and throw out counter offers. Sawmill order files were around three weeks out with very limited material available any earlier.” — Madison’s Lumber Reporter

Sales volumes of Western S-P-F lumber and studs in the United States took another step back last week. Buyers were increasingly cautious as the disparity between November lumber futures and the current cash market reduced overall urgency to buy. Sawmills held on to order files into at least late October and kept their prices flat. Lack of supply was a constant topic of discussion and field inventories remained nearly empty in most cases.

“Dimension lumber prices were flat while panels (Plywood and OSB) seemed to have finally topped out. ” — Madison’s Lumber Reporter

Western S-P-F sales activity in Canada remained quiet last week as buyers were content to wait for previously-ordered wood to arrive while they filled their inventory gaps opportunistically from the distribution level. Producers maintained five week order files at sawmills and were unworried about the pause in demand, as they were keenly aware of the depleted state of all downstream field inventories. Rail car supply was still an issue, which predictably put increasing pressure on truck availability.