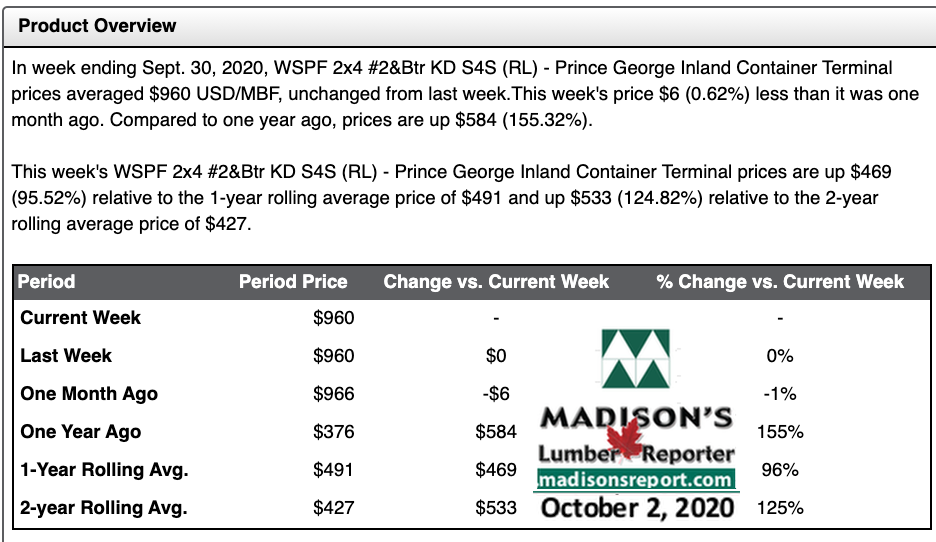 As previously stated by Madison’s, for US home building activity and thus softwood lumber demand, “Labour Day is the beginning of the end and US Thanksgiving is the end of the end”. Canadian Thanksgiving is somewhere in the middle of these important dates, so provides a good indication of what is happening with lumber prices as US housing slows down into the winter season.
Last week most sawmills reported order files of three weeks or longer, which is quite strong for this season. Deliveries were terribly behind, making customers nervous that about their wood arriving in time for construction needs. Demand was truly non-stop, so there is no reason for lumber producers to lower prices.
The good news is that all sawmills are well stocked with logs.
Eastern S-P-F R/L and Western S-P-F straight-lengths prices corrected down last week by a noteworthy amount. However the week before OSB & Plywood prices popped up significantly, providing no immediate clarity on the future direction of the North America construction framing dimension softwood lumber market. US housing data continues extremely strong for the time of year. These storms and wildfires are scaring people.

Sales volumes and inquiry in the US Western S-P-F market dwindled again last week as buyers noted some sawmill asking prices corrected down. Order files at sawmills varied from three to five weeks out depending on the source, and transportation continued to throw a spanner into every shipment. Complaints about rail service were more common by the day and players knew that this will only worsen as the mercury drops.
Demand was similar to the previous week according to Western S-P-F producers in Canada. Sales activity was quiet as players digested wood and sawmills focussed on getting product out to market in the face of ongoing rail troubles. While price corrections were mostly confined to straight-lengths, producers were listening more intently to counter offers on all items than they have in months.
Order files were in the four- to five-week range, which sawmills maintained would be shorter if shipments were smoother and if they were getting more than 60 per cent car supply.

“As prices of Eastern S-P-F cratered last week buyers were content to step back and wait for a bottom, despite field inventories being nearly depleted in most cases. Sawmill price lists for studs also crashed hard as those order files were apparently into late October. ” — Madison’s Lumber Reporter