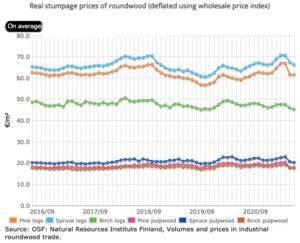 Spruce logs price in Finland reached an average of EUR 66.3 per cubic metre in standing sales in August. This was one per cent less compared to July.

The average price of pine logs increased by one per cent to EUR 61.6. The real price level of logs was three per cent higher than last year’s average standing sales price.

The standing sale price was EUR 20.3 per cubic metre for spruce pulpwood, EUR 18.0 for pine pulpwood and 17.8 for birch pulpwood. The average price level of pulpwood was the same as in July and six per cent lower than in the whole last year.

The roadside price for pine pulpwood was EUR 32.5, for spruce pulpwood EUR 34.1 and for birch pulpwood EUR 32.2 per cubic metre. In delivery sales, the average price of pulpwood rose by one per cent from the previous month and was seven per cent higher than in last year.

Trade of roundwood in non-industrial private forests normalized after exceptionally active June and July. In August, the volume was nine per cent higher than the average for the previous three years.