Japan wood industry in danger due to global timber shortage 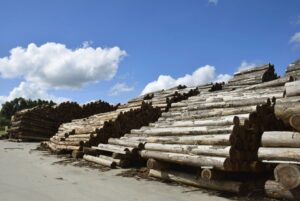 A global shortage of wood and soaring prices are threatening Japan’s lumber industry and has business operators fearing serious damage to the domestic market. With demand rising in the United States and China, where the national economies are picking up, lumber prices have skyrocketed and Japanese firms are struggling to procure material.

“I am not sure how long this is going to go on and how it will affect wood demand in Japan,” said Katsumi Tannaka, president of Butsurin Co., a Tokyo-based trading firm specializing in lumber.

“The next thing we know, people may not be building houses and wood demand will be falling sharply,” shrinking the market and hurting the whole industry.

Last month, lumber futures topped $1,700 (about ¥186,000) for the first time in history. Although prices have sagged to around $1,300 in recent days, they are still more than three times higher than what they were a year ago. The National Association of Home Builders in the U.S. also says lumber prices surged over 300% since April 2020, which has added an extra $36,000 to the cost of the average new home.

Due to the steep price hike, Japan has seen dwindling wood imports, as monthly imports of lumber and laminated wood have declined year-on-year from last October to April.

On top of booming demand due to housing construction and renovations in the United States, a lack of shipping containers and an increase in shipping costs have also contributed to unstable wood supplies.

Piles of lumber are stored outside a sawmill in the city of Shibushi, Kagoshima Prefecture, in August last year. Although about 70% of Japan’s land is covered by forests, roughly half of the lumber used for housing construction is imported, according to the Forestry Agency.

Although about 70% of Japan’s land is covered by forests, roughly half of the lumber used for housing construction is imported, according to the Forestry Agency.

Tannaka said Japan relies heavily on imports from Europe, but nations there have seen a lot of their exports go to the U.S. market in recent months.

Industry insiders say there are no quick fixes for the situation at this point.

A Forestry Agency official said the agency sent out notices in April to related parties and companies, asking them to refrain from securing more inventory than necessary. It has also set up seven regional meetings that consist of upstream, intermediate and downstream companies to get them to more closely communicate with each other.

One measure that the industry has turned to is to use more domestic lumber, but it is challenging to procure enough materials to cover the loss of imports in a short period of time.

Still, demand for domestic wood has been growing, pushing up its price as well.

Japan used to rely more on imports, but Tannaka said efforts by the government and the industry to revamp the domestic wood ecosystem have helped production and supplies become more stable over the past several years.

The industry has been trying to use domestic lumber for not only houses but also for low-rise buildings, such as schools, to create more demand.

“The efforts have started to finally bloom … the government has poured quite a lot of money into promoting new uses of wood to cultivate demand,” he said.

But Tannaka said he is gravely concerned that these efforts might be crushed by soaring prices that may deter people from buying items or building homes made of wood.

Moreover, he said many Japanese importers, including his firm, had been hesitant to order products from overseas due to the high prices, but they are now scrambling to buy what they can to secure supplies for their clients. Thus, it is becoming likely that consumers will see prices rise for homes and other products made of wood.

In Japan, where an economic recovery is still being dragged down by the pandemic, housing demand is not that strong, but the impact of the lumber shortage is becoming more visible at the consumer end and for business operators dealing with wood products. Local media have reported delays in housing construction schedules.

Akase Co., an Okayama-based firm that runs furniture stores in several major prefectures, announced that it will raise prices for its items made of wood starting in July.

“If we maintain the current prices, it would be quite difficult to manage the company,” said Hajime Otaki, who heads the marketing department at Akase, adding that the firm heavily relies on imports for its furniture.

“We have raised prices in the past, but the markup this time is quite high compared to the previous ones. We think that the impact of (lumber prices) is that big,” Otaki said.

Otsuka Kagu Ltd., a major furniture retailer, said the firm is not planning to make any changes to its pricing for now.

“However, we have hundreds of business partners and if they raise prices, we will need to think about it as well,” an Otsuka Kagu spokeswoman said.

As for when supplies may return to normal, that outlook is filled with uncertainty.

Tannaka of Butsurin said prices will simmer down at some point, but “considering various factors, I think the prices of imports will remain high throughout this year.