Ikea to face allegations of illegally logged timber from Ukraine 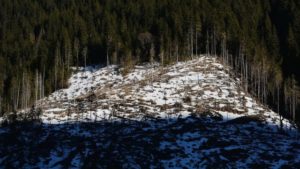 from ancient forests in Ukraine.

Although the timber was certified as sustainable by the Forest Stewardship Council (FSC), Earthsight’s investigations claim it was taken illegally from the Ukraine while authorities and FSC enforcers reportedly turned a blind eye, according to an investigation by environmental NGO Earthsight.

Ilegally deforested mountains in Pojarna Valley, in the heart of the Romanian Carpathians in Fagaras.

The Carpathian forests, which run through Ukraine, Slovakia and Romania, are some of the last remaining habitats for Europe’s lynx and brown bear populations.

Loggers broke environmental rules while harvesting wood from the area through 2018, 2019 and 2020, Earthsight claimed. The timber was reportedly used to make some of Ikea’s most popular items, including the folding, slatted Terje chair and the Ingolf dining chair. Hundreds may have made their way into UK homes.

“Ikea is the biggest consumer of timber in the world, and it’s using illegal wood from Ukraine for some of its most popular products, products that people are buying on a daily basis,” Sam Lawson, director of Earthsight, claimed.

Ikea insisted it does not accept illegally logged wood in its products, and said it has launched an investigation in the findings.

The allegations centre on the operation of the FSC certification system in Ukraine and beyond. Ikea demands that all its wood is FSC certified, but according to Earthsight enforcement of FSC rules in Ukraine is lax, allowing corrupt forestry enterprises to flout the rules and still sell certified timber.

In response to the allegations, FSC said it is “fully aware of the difficult environment in Ukraine” pointing out it has terminated certificates from 29 organisations in Ukraine in recent years.

“While the Earthsight report has highlighted some cases where the system has failed, it has not addressed the many thousands of cases where FSC has succeeded,” it added in a statement. “Earthsight has also only reflected the views of those who agree with them; not the views of the many environmentalists and social activists that fully support FSC because of the positive impact we have had on the ground across the world.”

General view outside of IKEA as it reopens to the public on June 01, 2020 in Southampton, United Kingdom.

Earthsight claims the corruption in Ukranian forestry was exacerbated by Ikea’s business model of providing low-cost furniture, which it argued was driving down prices in the supply chain to unsustainable levels. Logging firms “really have little choice but to accept Ikea’s prices, and it’s hardly surprising they cut corners as a result,” Mr Lawson argued.

He called on Ikea to raise its prices and step up its internal audits of supply chains. “[IKEA] need to interrogate those supply chains themselves and do their own audits in the forest,” he said.

Ikea has some of the most ambitious environmental policies of any corporate in the world, with a promise to be “climate positive” by 2030.

“We welcome reports and findings by NGOs and take them very seriously,” it said in a statement. “We have immediately begun investigating the allegations and are committed to engaging further with Earthsight.”

“We acknowledge that illegal logging remains a widespread global issue, and work proactively to implement measures to verify that our suppliers comply with legality and our requirements,” it added.