Historic fall in US housing starts 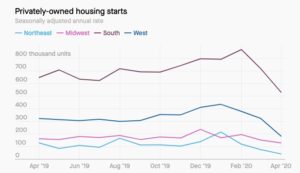 US housing starts in April  plunged by the most on record going back to 1959 as sweeping lockdowns to contain the coronavirus pandemic continued to slam the housing market.

Coronavirus has significantly constrained the construction of new homes, according to the most recent housing data from the US government, even while city dwellers rattled by the pandemic are increasingly interested in buying new houses in the suburbs.

The latest reports issued show significant declines in building permits, housing starts, and completions in new residential construction across the US. The number of privately-owned housing units authorized by new building permits for the month of April fell to just over 1 million, a decline of 21% from 1.3 million, the revised number for March, and is 19.2% lower than the number of permits for the same month last year. This includes both single-family homes and multi-family structures.

Building permits for single-family homes in April fell more than 24% from the previous month. There were even more significant declines in the number of housing starts, which fell to seasonally adjusted annual rates of 891,000, a decline of slightly more than 30% compared to March 2020 and April of last year.

Within this overall seasonally adjusted annual number of housing starts, single-family units decreased 25% to 650,000. This is the lowest single-family start rate since the first quarter of 2015, according to the National Association of Home Builders (NAHB). Housing starts for multifamily buildings, which includes apartments and condos, fell more than 40% to 234,000.

social distancing guidelines reduced open house viewings, and an economic slump that encouraged prospective sellers to stay in their existing homes. There were also 618,000 layoffs in the construction industry during the month of March, according to the Bureau of Labor Statistics.

But while construction and sales slumped, there’s reason to believe demand is building. Low interest rates, the lifting of stay-at-home orders across several states, as well as growing inquiries in suburban areas from residents in expensive, high-density cities like San Francisco have helped increase demand for single-family, new homes, according to the latest housing market index (HMI) forecast from the National Association of Home Builders (NAHB) and Wells Fargo released yesterday.

The HMI is on a scale of 0 to 100 and measures the market’s appetite for home buying. After a significant drop in HMI between March (72) to April (30), May’s preliminary number on the index rose to 37.

However, mortgage applications have also fallen 2.6% from one week earlier, according to the most recent data released today from the Mortgage Bankers Association’s (MBA).

While the increased interest in home buying is encouraging, officials are cautioning it may be a temporary blip caused by the relaxing of stay-at-home orders.

“As states gradually reopen and both home buyer and seller activity increases, we will be closely watching to see if these positive trends continue, or if they reflect shorter-term, pent-up demand,” said Joel Kan, who oversees MBA’s housing market forecasts and several industry surveys, in a statement.