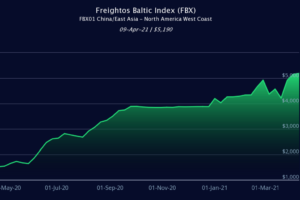 The week-long obstruction of the Suez Canal has passed, but the impact it has caused is coming.

Ships and containers in Asia have been restricted, the spot freight rates of containers on popular routes such as Europe and the United States have risen sharply, and the ports are also in continuous congestion.

Port congestion will continue into the third quarter

At the briefing of the world’s fifth largest shipping company Hapag-Lloyd last week, its CEO Rolf Habben Jansen said that he expects that the container market will still have congestion problems before the third quarter.

“Not only in the United States, Europe and many ports in Asia, there are congestion problems to a certain extent, which means that the current shipping companies actually need a large amount of ship capacity to transport the same number of containers.” Habben Jansen said.

“In simple terms, for each service, if you want to continue to provide weekly services, you will need to add one or two more ships, depending to some extent on whether it is going to the United States or Europe.

Of course, we are also seeing some port capacity reductions because of labor shortages or pandemic-related restrictions in many places. “He added: “Due to crowded markets and strong demand, short-term freight rates have soared. “

All routes have increased prices

The consequences of the week-long blockage of the Suez Canal began to appear, and the spot freight rates of the Asia-Europe and American routes “increased sharply”.

On the trans-Pacific trade route, the Freightos Baltic Exchange (FBX) index from Asia to the West Coast of the United States rose 4% last week to $5,375/FEU, an increase of 251% over the same period last year.

Last Friday, the Ningbo Container Freight Index (NCFI) in the Nordic and Mediterranean regions soared by 8.7%, which is almost the same as the freight rate (ocean and ocean freight surcharges) (SCFI) of 3964 US dollars/TEU for exports from Shanghai to the European basic port, up 8.6% from the previous period. Coincides with the growth.

NCFI commented: “The shipping companies collectively pushed up the freight rate in April, and the booking price rose sharply.”

The “container crisis” is still unsolved!

As global shipping costs remain high, many import and export companies are now having to sign freight contracts for the next 12 months at high freight rates. And more and more people in the industry are beginning to worry that these additional costs will eventually be passed on to consumers. From China to the West Coast of the United States to European ports, container prices have been hovering near record highs for several months. Although according to past practice, freight rates usually fall back at this time of the year, the conditions for further price increases are now becoming more mature. At the same time, new contracts being signed by some of the largest US importers indicate that rising freight rates will not be a short-term phenomenon.

Global shipping will usher in “the craziest summer in history”!

To make matters worse, while freight rates are skyrocketing, US shipping may usher in its busiest summer.

On the one hand, the Covid-19 pandemic has stimulated the rapid development of the “home economy”, and people have become keen on online shopping, which has caused the volume of consigned freight to soar. On the other hand, the economic stimulus policy of the Biden administration and the continuous isolation policy in the winter in the United States made this situation worse.

For example: Houston and Savannah, Georgia have seen a surge in truck traffic in the past month, and capacity has tightened to record levels. The rejection rate of maritime tenders in the above regions has also reached a record high in the past two weeks.

The post Global container crisis still unsolved and could extend through the third quarter appeared first on Timber Industry News.