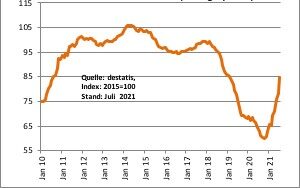 The wood prices have risen sharply recently. However, the price increase for German forest owners was much more moderate than for the sawmill industry. According to the data from the Federal Statistical Office, the prices for spruce logs July were almost 35 percent higher than in the previous year. At the same time, the industrial selling prices (producer prices for commercial products) were 123 percent higher for softwood lumber, according to the Destatis surveys. The prices for industry and trade have risen four times as strongly as the prices at the producer level.

Nevertheless, German forest owners were significantly more satisfied with the spruce wood prices than in the previous year: In its Holmarkt report at the beginning of the second quarter, the Bavarian Ministry of Agriculture (STMELF) still reports prices for spruce sections 2b + of just over 90.00 euros per solid cubic meter .

For pine logs, prices for fresh wood were mostly over € 85.00 per cubic meter.

The Bavarian Ministry of Agriculture (STMELF) also reported that the market for pine logs has picked up in the wake of the very strong demand for spruce. For fresh wood, prices up to over € 85.00 per solid cubic meter were paid. The demand for Douglas fir and larch logs also remained high as prices continued to rise. Regionally, despite the larger supply, the demand could not be satisfied, reports the STMELF.

The price index for softwood lumber and wood-based materials for wooden packaging and pallets is determined monthly by the Bundesverband Holzpackmittel-Paletten-Exportverpackung (HPE) in cooperation with the Rheinische Friedrich-Wilhelms-Universität Bonn. The HPE index has been rising sharply for months: since spring there have been double-digit increases every month: In June the index showed a price increase of 145 percent within a year.

Hardwood does not benefit from the rally

The prices for beech wood in July for forest owners were only 4 percent higher than in the previous year.

The Bavarian Ministry of Agriculture nevertheless believes that the mood among the hardwood processing companies in Germany has brightened somewhat. In any case, forest owners assess the current business situation better than at the end of 2020. Nevertheless, expectations for the coming months are still relatively cautious.