Germany: Massive exports to the US put pressure on domestic wood prices 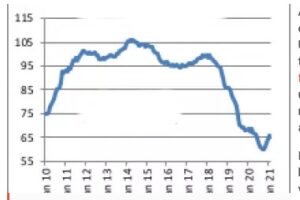 Most recently, the prices for spruce were around 9 percent higher than at the height of the market crisis last autumn. On the other hand, forest owners in Germany still get a third less for spruce than they did two years ago.

At the same time, the German wood market is empty. The reason: With exports to the USA and China, the demand is going through the roof.

On the other hand, many forest owners cut much less wood than usual because of the very low prices. That means: The market is extremely scarce and wood is currently in short supply!

In addition to the forest owners, who have to cope with the very low prices, the victims are many craftsmen and the local construction industry, who are dependent on construction timber. They often have to pay very high surcharges for the goods that are still available on the market.

Price evolution of spruce: Most recently, the prices for spruce in Germany were around 9 percent higher than at the height of the market crisis last autumn. On the other hand, German forest owners still get a third less for spruce than they did two years ago

Only a more rapid price increase at producer level could actually help, which would also lead to better supply, at least in the medium term. Because then it would be worthwhile to bring more goods onto the market.

One reason for the lack of wood on the domestic market is the booming export. German sawmills and exporters report that large quantities of German wood are flowing into the USA in particular.

In America, spruce sawn timber, which was recently so vilified in Germany, is in extremely high demand. The Americans pay 60 percent higher prices than on the domestic market, report exporters.

Of course, this pulls off an enormous amount of goods and could only be slowed down by further increases in prices on the domestic market. But in Germany, the supply is often no longer a question of price – often there is simply no more goods available, and when goods are offered, the price surcharges are enormous.

In addition: Despite the high prices that the Americans pay, the wood from Europe is still much cheaper in the USA than the domestic material.

One reason: In the USA, many wood production facilities are not working or only working at half speed due to the coronavirus criss. In any case, the timber price on the US domestic market has been going through the roof since last fall.

In addition: the huge corona aid package from the US government, part of this money apparently also flows into the US wood industry. Companies can then pay much higher prices for imports.

The current US import statistics confirm this import boom: In the first two months of this year alone, the Americans imported around 33 percent more softwood sawn timber from Germany and 22 percent more hardwood sawn timber. In both areas, Germany is now the second largest supplier – clearly after Canada.

The result: an empty German timber market. ”Local construction companies and craftsmen are now buying everything they can get on the timber market,” says Klaus Haller of the Nuremberg Building Guild. Because of this the warehouses of the German construction industry are empty.

The run on the lumber increases the shortage even more. A change in the situation is obviously not in sight anytime soon. Because for that to happen, more wood would have to flow from the forest owners to the market – and that fails because the producer prices for wood are too low.

The post Germany: Massive exports to the US put pressure on domestic wood prices appeared first on Timber Industry News.