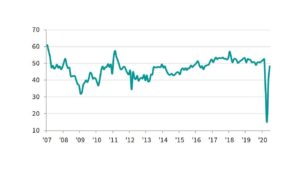 June saw a further drop in construction activity across the Eurozone, although the latest decline was only modest amid a relaxation of Covid-19 measures.

Order books fell at a noticeably slower rate than the past few months, though job shedding continued, according to the latest figures from the IHS MarkitPurchasing Managers’ Index (PMI).

The IHS Markit Eurozone Construction Total Activity Index rose sharply from 39.5 in May to 48.3 in June. The figure, which is only slightly below the 50.0 ‘no change’ value, indicating the smallest decline in construction activity across the eurozone since February. Survey data showed France and Italy recorded construction output growth, while Germany posted a further marked decline.

Bernard Aw, principal economist at IHS Markit, said: “Amid an easing of Covid-19 measures, the downturn in eurozone construction activity eased markedly in June. The Total Activity Index recovered further ground, thanks to increased construction output in France and Italy.

“That said, construction demand remained weak, with new orders falling at a sharp pace in June despite easing further from April’s collapse. Firms also cut back purchasing activity and reduced staﬀ numbers, though the rates of decline in both were not as severe as in previous months.

“Therefore, a further recovery is by no means assured, and could easily reverse direction. Business expectations about the 12-month outlook remained pessimistic, partially reflecting the ongoing impact of Covid-19 pandemic on demand and investment.”

Work undertaken on home construction in the eurozone declined further at the end of the second quarter. That said, the pace of contraction eased markedly from May and was only modest overall. The downturn in housing construction activity was led by Germany and France. By contrast, Italy posted a second monthly rise in home building activity.

Commercial building activity across the eurozone fell further in June. The rate of decline slowed further from April’s record, but was marked overall. The decline was driven by Germany, while France and Italy registered growth, with the former doing so after three consecutive months of decline.

Eurozone civil engineering activity fell further in June, extending the current sequence of contraction to 11 months. The rate of decline was noticeably slower than May but remained steep overall. National data revealed a decline in civil engineering in Germany and Italy, while France posted growth.

New business received by eurozone construction firms fell further in June, though the rate of decline eased noticeably from May. While lower sales were linked to weak client demand, there were reports that the easing of Covid-19 restrictions boosted orders at some firms.

Amid reduced activity requirements, eurozone construction firms continued to reduce capacity. Consequently, employment shrank for a fourth successive month. However, the rate of reduction eased noticeably from May, and was modest overall.